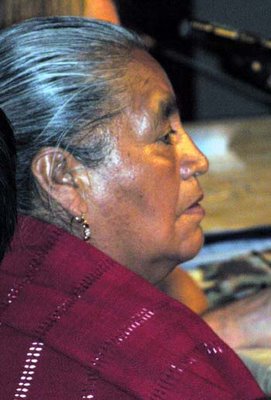 Ouch! Here’s a gorgeous matriarchal group, the Zapoteca Mayan. Despite the patriarchy’s best attempts for five centuries to flush them down the toilet, both women and men remain marvelously strong and vibrant. Guess who wants to take a swing at them now? Wal-Mart:

"The audience listened closely as Doña Enriqueta Contreras of the Zapoteca Mayan indigenous community in Oaxaca, Mexico, described how her pre-Colombian culture has always been devoted to the reverence of Nature and equality between men and women, despite efforts by the Spanish “invasores” (invaders) to impose a contrary value system.

Doña Enriqueta also denounced the current plan by Wal-Mart Corporation to establish a store in Juchitlán, and then made a connection of this project to patriarchy both past and present: “Despite the fact that our respect for the divinity of nature was overlaid by European Christian ideals that were male-centered and patriarchal, our regard for the sanctity of Nature, and our imperative connection to it has survived the holocaust of that first fateful meeting five centuries ago. But we will fight it now [again] with Wal-Mart,” she concluded.

Juchitán is a town in southern Mexico. Its 100,000 inhabitants belong to the ethnic group of the Isthmus Zapotecs, with about 350,000 people living in the coastal plains of the Isthmus of Tehuantepec.

According to Prof. Veronika Bennholdt-Thomsen of Germany, “The Juchitecan society is a matriarchal society that is well nourished and relatively wealthy, whereas normally ‘indigenous' and ‘poor' are nearly synonymous.” She claims that their wealth is due to a well functioning regional economy which is the result of the work of the woman traders. That is precisely what would be dismantled if Wal-Mart were to come into town. MORE >>>>

After reading Confessions of an Economic Hit Man (see my Dec. 13 post), I can barely stand this. I might hafta show up at church again – the Church of Stop Shopping, that is (see my Nov. 6 post). I understand that the Reverend Billy is leading his flock into the shallow-ed halls of Wal-Mart to lead their flock back to the Light (of Cut Short Your Shopping).

I’m feeling a great need these days to atone for the sins of my nation.

I love seeing these societies highlighted, all around the blogs I read many men commentators saying emphatically that all societies, have always been patriarchal. They don't seem to want to find out about any other view, what a surprise.

The problem is most people still define "matriarchy" as "rule by women." Or "women over men."

Here's how Heide Goettner-Abendroth (who lead the 2nd World Congress on Matriarchal Studies in Sep./Oct.) defines matriarchies: they are “economically balanced” societies that are “egalitarian in the relationship between the genders and generations….” Politically, they are “consensus-based.” They possess “principles and social codes allowing humans to live in peace with each other and in harmony with nature.” (From http://www.second-congress-matriarchal-studies.com/lecturers.html)

From listening to Heide’s presentation on FIRE, I also got this: Matriarchies are not just the reverse of patriarchy. On the contrary, they are free of hierarchy and domination. The differences between the genders are honored, not muted. The same is true with the various age groups and other differences. Heide spoke of ‘complementary equality’ and said that in matriarchal societies the ideal of balance in all things is very important.

Maybe we should use a word that doesn't have "archy" in it. You know, as in "hierarchy" and "monarchy."

So the men are absolutely right! There has never been (probably) a society in which women dominated men! They might have had a smidgeon more power when it came right down to it, but healthy women are too smart to use their power stupidly, i.e., to dominate.

Good points, but I don't think men are right when they say all societies have always been patriarchies.

I think the problem here is the idea of dominance. Maybe "matrifocal" would suit your purposes better, but the word matriarchy means women rule - not that they dominate. The dominance/submission dichotomy is what has allowed patriarchy, and particularly Western white patriarchy, to flourish. It's not that the culture is superior - it's that they are willing to steam roll over people to get what they want without regard to the good of others. A Matriarchy is by definition concerned with the welfare of the whole society, where each is some mother's child. Patriarchs will murder and enslave others, steal, pollute, rape, and wage war to concentrate wealth into the hands of a few at the expense of everyone else.

Matriarchy is not only not the opposite of patriarchy, it's a completely different way of thinking and being in the world. Our job is to help people envision that kind of society, where competition and greed are not tolerated, let alone glorified as Americans do. We have to undo a lifetime of indoctrination that has conditioned us to believe that the sick alienation and objectification of nature and living beings is normal human behavior. There's nothing normal or functional about it, and we need to make people understand that. A few very wealthy people are wielding power to make sure they stay that way at our expense - we need to take away that power, and the first step is to redefine "power" and "success" in holistic, functional terms.

This nation is about to be plunged deeper into the atonement deficit. Please note that legislation to drill in the Arctic Wildlife Refuge has been hidden in the defense appropriations budget. Meaning that any federal legislator who votes against Arctic drilling will also be voting against "defense." This crafty scheme could finally doom the Wildlife Refuge once and for all.

As for this interesting post on indigenous people and Wal-Mart, I declare I wish I had an answer! Athana, your image of the goddess and mine differ in that I think, like a mom pushed past her breaking point by bad children, she's going to mete out some punishment.

Okay, that's the Celt in me, but there you are.

So well put, Morgaine. This especially rang bells for me: "A Matriarchy is by definition concerned with the welfare of the whole society, where each is some mother's child. Patriarchs will murder and enslave others, steal, pollute, rape, and wage war to concentrate wealth into the hands of a few at the expense of everyone else."

anne, I listened to The House proceedings on C-span last night. It was only Democrats for quite a while, so I heard a lot of anger about this slipping the Arctic drilling into the defense budget bill.

Then I got this from a friend this morning:

"Action Plan
>Can you call? Time is VERY SHORT and we must help our allies understand now
>that keeping Arctic drilling provisions out of any bill is our number one
>priority. Now is the time to nip this latest assault in the bud.
>
>Capitol Switchboard: 202-224-3121; ask for your Senator's office."

Just in case you don't have the number handy.

Wow, you've brought up a very interesting bit of theaology that needs to be thought out and filled in by the Goddess movement. Or at least thought out. Does the Goddess punish bad people? Especially REALLY bad people like Wal-Mart, George Bush and Big Oil? I think that'd be an excellent topic for a post or two.

The Goddess doesn't punish people. If we continue to sicken and abuse her, she will eliminate the source of the abuse in her attempt to heal herself. If that means getting rid of us, so be it. She's done it before - we'll be back, and maybe we'll learn this time. Any living organism will function this way and She is a living organism.

Also, the three-fold law is in play. Whatever you send out comes back on you. We punish ourselves, so she doesn't have to. We're about to reap what we've sown.

but...a lot of us men want Women to rule. egalitarianism doesn't motivate us - the divorce rate shows that. what motivates many of us and excites us and makes us happy and eager to please Women is Women's accepting the superior position we've always known to be theirs by rights - patriarchal terrorism and propaganda never fooled us - and expecting and demanding that we do as they tell us. for a lot of us, submission to loving Female authority is fulfillment itself.

i know not every man feels that way, but Women need to recognize that many of us do. it will serve everyone for those Women who are so inclined to recognize and take advantage of the fact.