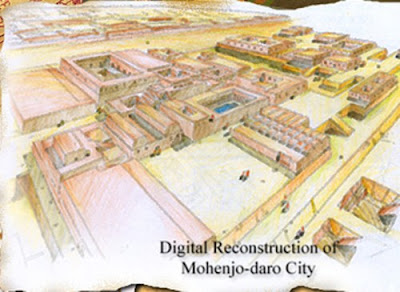 In this post, I rock and roll for a while with Om Shanti, who says the violence of the goddesses Durga and Kali "should *never* be taken at face value...."*

Om: Whatever you think Durga and Kali's actions might *mean," the fact is, they *are* violent. Although anyone can say their violence does not mean violence, the fact is, on a constant basis, Durga and Kali throw examples of violent behavior on the big silver screen of the Hindu mind.

For every new generation of Hindus, they hustle out their Technicolor lessons in how to do violence.

Do all religions crackle and pop with violent deities? No. In fact, it's my understanding that few do.** So why Hinduism, Islam, Judaism and Christianity? What's up with them?

To say as you do that deity violence symbolizes the "destruction of ignorance," begs the question. If I gave any dude off the street a ten-dollar bill to come up with ten *non-violent* ways to symbolize the stamping out of ignorance, he'd tick them off in no time. First on his list would be teachers, reading and schools.

Om, read up on ancient Indian history.*** In my humble opinion the ancient Indus Civilization was one of the most radically awesome in all of human history: not only peaceful and non-violent, but also technologically sophisticated and economically egalitarian (everyone shared the same high quality of life).

But I know of no evidence that this awesome civilization danced with violent goddesses. The Indus Civilization existed before the Indo-Europeans hit India sometime during the second millennium BC, and shoved their patriarchal warrior religion and social hierarchy down the throats of the Indian people.

According to Heather Elgood of the British Museum, the entire Rg Veda holds not one major goddess in it. One of the most visible, however, was Usas, Goddess of the Dawn -- notable mostly because she was raped by her father, the god Dieus.

Om, India and the glorious Indus Civilization figure prominently in my new book, on sale beginning in November or before, Switching to Goddess: Humanity's Ticket to the Future. Be sure to read it and let me know what you think. If you want, you can even pre-order a copy now, by going HERE. Or ask your local librarian to spring for a copy.
________________
*For the rest of Om's comment, see August 19 post, "Fooey on Fighting."
**I welcome info from anyone who can prove me wrong on this.
*** Jane McIntosh's A Peaceful Realm: The Rise and Fall of the Indus Civilization is an excellent source.
____________
thnx to Rajamanohar for the foto of the reconstruction of the Indus Valley Civilization city of Mohenjodaro; go HERE to see more.
Posted by Athana at 8:36 AM 6 comments: 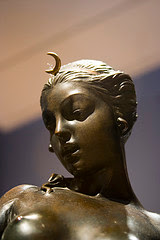 In a world stuffed with millions of Goddess-less churches, Geraldine Charles finds it odd that the world's five or six Goddess temples are chided for being god-less. A few snippets from her delicious article:

...the Magdalene figure is still being offered to us as a role model, although in the new, improved version we are now told that as modern Magdalenes we can “marry” the god and bear his child. I’ll pass, thanks....

"...Of course, we haven’t even considered reclassifying male deities as demons (see any Old Testament for evidence of this done unto goddess)!

"It should hardly need to be pointed out that a Goddess Temple exists for a reason – in part to redress, in a very small way, thousands of years of complete imbalance, by providing a place where our love of goddess can freely be expressed and celebrated. Why have a token male deity in such a place? Surely that would simply be an afterthought, even an insult...."

Email ThisBlogThis!Share to TwitterShare to FacebookShare to Pinterest
Labels: gods 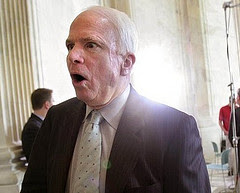 "...the joke McCain made at the Sturgis Motorcycle Rally encouraging Cindy [his wife] to enter the topless Miss Buffalo Chip contest...." (From Maureen Dowd in the New York Times)

And this is the man who thinks he's qualified to lead the free world -- over half of which is female.

Email ThisBlogThis!Share to TwitterShare to FacebookShare to Pinterest
Labels: McBush aka John McCain

Radical RELIGION AT THE DNC 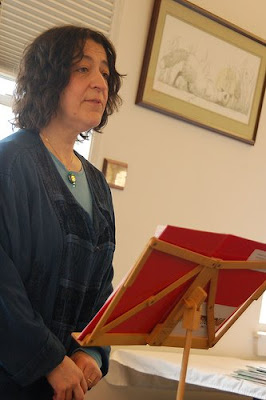 Well, 2008 has been the year of the dispossessed for the Democratic Party -- running as it has, a woman and a black man for the presidency both in the same breath.

So why not one more milestone: a pagan delegate at the Democratic National Convention in Denver -- one holding open, public, pagan rituals there?

"Rita, who runs a bookstore in Maine [Apple Valley Books in Winthrop, Maine], was outed and stalked last year by a local conservative Christian organization [Christian Civic League of Maine]. Since then she has dedicated herself to being an open and positive Pagan presence within the Democratic Party.

"She is blogging daily from the Convention, and recently held a public pagan ritual in downtown Denver, where the Convention is being held."

Truth be known? I find it a bit of a chuckle that it was the radical religious right that helped catapult Pagans onto the national political scene.

YOUR Money & THE GODDESS 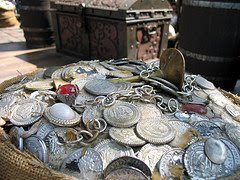 Since all the news channels seem to be staging regular shows lately on the topic "Your Money," I thought I too should snap out something on the subject.

So. What does Goddess say about Your Money? Well, one thing is certain: She and YAJ rarely agree on anything. So whatever's he's saying -- She's not.

And since YAJ says the rich suck ("It's easier for a camel to get through the eye of a needle than for a rich man to get into heaven"), the Goddess must be thinking the rich shine like stars.

Only here's the thing: the Great Mother thinks poverty is so not cool, that if there's even one poor dude trudging around the planet, She can't concentrate on anything. So even if you're rich and She adores you for it, you may not get much of her love and attention -- She's too busy bleeding over that one poor dude.

I mean, what healthy mother loves it when some of her kidlets are rich but others are poor?
_____________
*YAJ is the god Yahweh-Allah-Jehovah. Although most see YAJ as three separate deities, he's really only one, big sorry mess of a dude (British zoologist Richard Dawkins calls him a “… vindictive, bloodthirsty …, misogynistic, homophobic, racist, infanticidal, genocidal, filicidal, pestilential, megalomaniacal, sadomasochistic, capriciously malevolent bully" ~ Dawkins 2006: 31).
________________
thnx to North Idaho Dad for the foto; go HERE to see more.
Posted by Athana at 8:21 AM 2 comments:

Email ThisBlogThis!Share to TwitterShare to FacebookShare to Pinterest
Labels: Money and Goddess; Goddess and money; rich and poor

A LONG TIME IN Slime 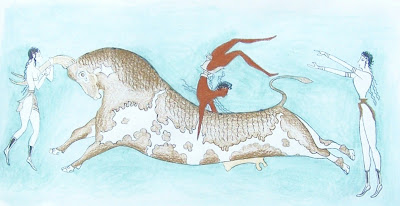 “… in 1700 BC, the [Goddess-centered] Minoans were as technologically advanced as Europeans were in – get this — AD 1700. To me, this is an astounding statement. What it means is, after being beaten to a pulp by father gods, Europe took 3400 years to bounce back onto its feet again — technologically speaking at least.”

~From Swtiching to Goddess: Humanity's Ticket to the Future, coming November 28, 2008 (but you can pre-order it now, at Amazon.com).
_______________
thnx to me, Athana, for this drawing of Minoan bull leapers, which was found by archaeologists on a wall in the ancient palace of Knossos on the island of Crete
Posted by Athana at 6:26 AM No comments:

Email ThisBlogThis!Share to TwitterShare to FacebookShare to Pinterest
Labels: 1700 BC, Minoans

A GOOD TIME WAS Not HAD BY ALL 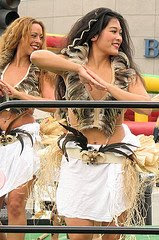 The story took my thoughts wandering down this particular path: there's a whole boatload of ways people have sex such that their partner has no fun whatsoever: Rape comes to mind. Child molestation. Incest. Public exposure. Public indecency.

Then this popped into my mind: The Bible says the only non-sinful sex is procreation sex. Sex for pleasure is a trashy, sordid sin.

And then I wondered: could there be a connection?

Could it be that war-god cultures have sex offenders simply because some dudes can't get aroused unless at least one person in the sex act (their partner) is failing to have a good time? I mean, isn't this exactly what the Bible dictates?

Here's the thing: I don't think people un"blessed" by Christianity, Islam, Hinduism or the other war-god religions do pleasure-absent sex. Take, for example, the Trobriand Islanders of the early 20th century. Making love there was nothing but delicious and delightful -- for everyone involved.

A few days ago, Vicki Noble emailed me about a new film called Durga Rising:

"I am writing to encourage your attention to ... an original documentary film about ... the Indian Warrior Goddess Durga. In a time of unprecedented destruction and corruption on this planet, there is a need for "slaying the demon" of ravenous greed and murderous violence...."

"Durga--somewhat like the Greek Nemesis--is the Goddess who brings the world back into balance, by slaying the patriarchal demon who is destroying the world. Surely after 5000 years, it is time for such a radical rebalancing."

But see, I just don't wanna go there. I want to heal the world through Mother love. Fooey on fighting violence via violence. Call me addle-brained, but I just can't let go of the idea that teaching, and "gentle prodding" will do the trick.*

In my opinion, Durga, Kali, Nemesis and other violent goddesses are simply patriarchal makeovers (i.e., beginning around 6000 years ago, the war gods began taking non-violent goddesses and turning them violent; see comments section of Feb. 21, 2007 post, "Time to Ditch the Dude").

When the brothers in the forest tried to rape the awesome Irish goddess Macha, did She slash back with physical force? Nuh-uh. After tying them one by one to trees, She taught them "right ways" (see Oct. 17 '06 post, "Handling Bad People").
_________________
*Although this won't be as easy as falling off a log. Few of us know the tricks to fighting violence with the weapons of teaching and gentle prodding. This is a skill that needs to be studied, experimented with, and taught -- just as our military has studied, experimented with and taught men and women the art of planned violence.
____________
thnx to ancientartizen for the foto; go HERE to see more of her work.
Posted by Athana at 6:31 AM 17 comments:

WALTER ON THE War GODS

"When I anchored the evening news, I kept my opinions to myself. But now, more than ever, I feel I must speak out. That’s because I am deeply disturbed by the dangerous and growing influence of people like Pat Robertson and James Dobson on our nation’s political leaders.

"...I have watched with increasing alarm as Religious Right groups manipulate religion to further their intolerant, political agendas. ... They have gained considerable influence at every level of government...on local school boards, in the Administration, the courts, and in Congress. They have shrewdly twisted the traditional healing role of religion into an intolerant, political platform...."