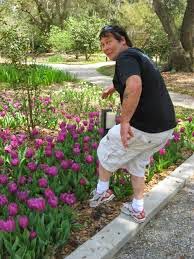 I feel cheated, I really do.  In other places, people have a day just for their beloved dead grannies, but do you think good ol’ Christian America would be so considerate and kind?

Everyone but us!  In Babylonia and ancient Greece there was the Feast of All Souls.  In Rome the ancestors were celebrated every February.  The Buddhists hold their Feast of the Dead on April 15.  And even China and Japan have their annual Feast of Lanterns -- just for dead people.*

When I was growing up, my poor family had to sneak around the graveyards on Memorial Day, and shoot furtive glances left and right to make sure no one was watching.

Then we'd drop flowers on the graves of our non-war-hero ancestors, and scurry away ASAP before we were caught red-handed honoring someone who didn’t die in a war.

(For those of you outside the US, America’s Memorial Day is technically a day for honoring dead soldiers, not ordinary grammas and grampas.)

But since I now have Samhuinn to honor my dead, I feel lucky in a big way.  I can openly feel fuzzy and warm about them again, commune with them, love them up from this side of the veil (which is swirling ever and ever thinner even as I write). 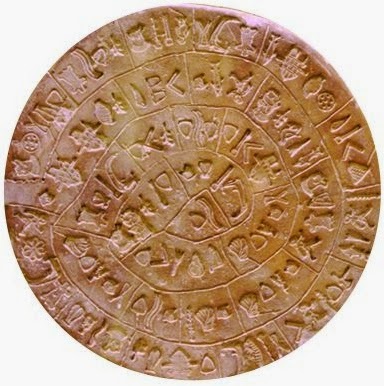 Today, barreling down on us like a comet out of the stratosphere, came a shocker: A British scientist dude says he’s actually deciphered the mysterious ancient Minoan “Phaistos Disk.”


Ever since it was discovered in 1908 in the Minoan “palace” of Phaistos, in south-central Crete, this ancient disk, dating from around 1700 BC, has been a total mystery.

For over a century, no one has been able to decode its spiral writing, written in “Minoan A,” the script of the goddess-worshipping ancient Minoans.

Now, scientist Gareth Owens says he “was able to identify three key words” on the disk:

IQEKURJA, which [he says] may mean "pregnant mother" and/or "goddess."

IQE, which may mean "mother" and/or "goddess" and which appears repeatedly on the disk.

IQEPAJE or IQE-PHAE, which may mean "shining mother" or "goddess."

And the meaning of the entire disk?  Owens thinks it was a prayer to the Minoan Mother Goddess.

How cool is that?

Tonight I pulled an old metal replica of the Phaistos Disk out of my jewelry box.  Since I bought it ten years ago in a tiny tourist shop in southern Crete, it’s a bit tarnished.  But I’m going to shine it up, attach a chain, and wear it around my neck.

My own private prayer to the Goddess, lying over my heart always and forever.

GOT EBOLA? thank A CHRISTIAN 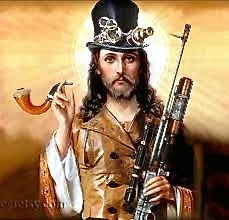 In 2011 Congress was shanghied by the Tea Party -- a shaggy group of Jesus Freaks, Born Agains, and Christian Wingnuts -- who then stomped all over the dudettes & dudes working on ebola cures.


So one Tea-Partier Congress dude, he sez to the other:

“Those BLEEPing American babies who got no food – what the BLEEP do they need food money for?  If that brat’s parents won’t work, that brat don’t deserve food!”

And the other one replies:

“Yeah!  And those BLEEPing scientists who doodle around, there, huntin’ up cures for ebola, there – what the BLEEP do they need money for?  God Hisself will cure your diseases, brothers and sisters -- Amen!”

These headlines say it all:

(1) “The Tea Party: Is It the Christian Right in Disguise?”

(3) “Ebola Vaccine Would Likely Have Been Found By Now If Not For Budget Cuts: NIH Director”

[In 2011] “newcomers to the 112th Congress came overwhelmingly from conservative religious denominations.

"Suddenly populated with all manner of home-schooling activists, youth ministers, abstinence proponents, former members of radical anti-abortion groups, and even a Mennonite, the current House of Representatives is one of the most religiously conservative in recent history.“

“...the Republican Party is controlled by a bunch of right-wing Christians...”

"NIH [America’s National Institute of Health] has been working on Ebola vaccines since 2001. It's not like we suddenly woke up and thought, 'Oh my gosh, we should have something ready here' ....

"Frankly, if we had not gone through our 10-year slide in research support, we probably would have had a vaccine in time for this...." (NIH director Dr. Francis Collins).

So dear readers: if you get ebola, you’ll know who to thank.
Posted by Athana at 8:19 PM No comments: