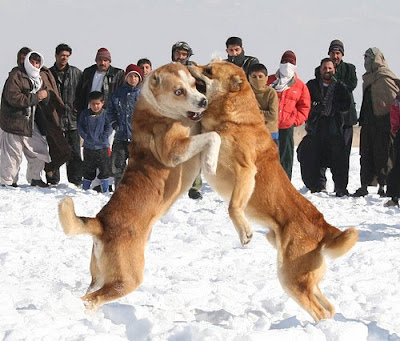 Ever notice how YAJ* barks and bites at himself -- 24/7? It’s not just Yahweh stomping on Allah, Allah jumping on Jehovah, and Jehovah yammering away at Yahweh. It’s Baptists beating up on Methodists, and Methodists mopping the floor with Mormons.

And each sect beats up on its own, the Reformed Baptists blistering the Free Will Baptists, and the Evangelical Methodists bellowing about how the United Methodists don’t have a *clue.*

Even in YAJ houses of worship there’s a feast of fussing and fighting. How to spend the church coffers. Who to hire to replace the priest (rabbi, iman, etc.). How many angels can dance on the head of a pin.

Maybe the way to sweep away the entire mess is just to let YAJ fight himself harder and faster, and faster and harder -- until he becomes a puddle of butter.

And we can take that butter home to Mama, who’ll make us some pancakes.

Yum!
___________
*YAJ: the god Yahweh-Allah-Jehovah. Most think YAJ is three separate gods, but they're wrong. YAJ is just one mean old dude with a split personality. He's the god of the Old Testament patriarch Abraham.
_______
Thnx to jeromestarkey for the foto of the Afghan dog fight. Go HERE to see more of his work.
Posted by Athana at 10:16 AM 2 comments:

WARFARE IS not IN OUR DNA

This article in NewScientist is worth a look-at. Says what I do in Switching to Goddess: anyone who thinks warfare is in our genes is off track:

OPTIMISTS called the first world war "the war to end all wars". Philosopher George Santayana demurred. In its aftermath he declared: "Only the dead have seen the end of war". History has proved him right, of course. What's more, today virtually nobody believes that humankind will ever transcend the violence and bloodshed of warfare. I know this because for years I have conducted numerous surveys asking people if they think war is inevitable. Whether male or female, liberal or conservative, old or young, most people believe it is. For example, when I asked students at my university "Will humans ever stop fighting wars?" more than 90 per cent answered "No". Many justified their assertion by adding that war is "part of human nature" or "in our genes". But is it really?