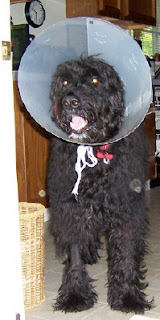 I don’t know if it shows, dear readers, but the past several months I’ve been out of it big-time.

First, there’s ten times more to blog about than I have time to blog.

Second, my poor Duncan had emergency surgery last week, which zapped every ounce of my emotional & psychic energy. He’s doing just fine; he says the worst part is the post-op Princess Collar.)

To top it all off, in two days I leave for a week’s trip West.

So happy the-rest-of-June to ya. I’ll catch up with you and my blogging too in July.

Hugs and kisses,
Athana
Posted by Athana at 6:59 PM 2 comments:

All over the world the first agriculturalists churned out small female figurines (and almost no figurines or other pics of males). Some of the hottest spots for these statuettes were Southeast Europe, Mesopotamia, Japan, and Mesoamerica (but people in many other places made them too).

Here for your viewing pleasure are a few from Japan.

Now, although almost anyone with a brain considers these figurines goddesses, there are a few dudes and dudettes out there spending their nights and days thinking up reasons why these figurines, blanketing the landscape as they do, are not goddesses. These dudes are so frantic that these figurines not be goddesses that they can get downright dimply. 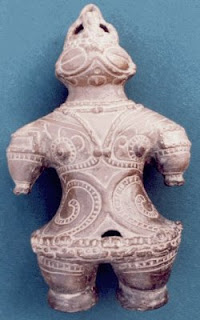 The archaeologist Tatsuo Kobayashi is one of these. Kobie swears the figurines aren’t even female. So what if they have breasts, says Kobie, “men also have these attributes…” (p. 155). Besides “large voluptuous breasts are quite rare” on Japanese figurines. So, says Kobie, “it is considered here [in his book] that these clay figurines are neither male nor female…” (p. 155). 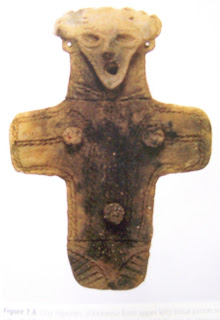 Kobie’s not the only scholar using “men have breasts too” for denying the goddesshood of Neolithic female figurines.

And me, I’m scratching my head and saying, “Gee, some women have beards. Why am I not hearing these dudes calling bearded figurines “neither male nor female”?

Oh, and BTW, the people who made these goddesses, like those who made them in other places around the world, lived in virtual utopias. The goddesses above for example were made by people who lived in what most call "a lost Eden, with people living in harmony with nature and little evidence for conflict..." (p. iii).
_______
The quotations above and the first two figurines come from Kobie's recent book, Jomon Reflections, 2004, Oxbow Books, Oxford, UK
Posted by Athana at 6:14 PM 2 comments: 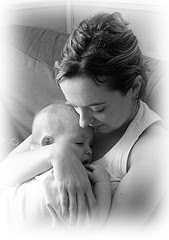 Well, some White Supe jumped in front of the TV cameras and started jabbering about how the only good things are white people and Jumpin Jehovah.

Another said, yeah, when anyone offed a black dude, he didn’t get hot & bothered because black dudes weren’t worth the paper they’s printed on (his grammar warn’t the conventional sort, but let’s not hold it agin him – you should take a gander sometime at the English George Washington used in his diary).

Anyhoo, I’m thinking to myself, “Self, can you imagine anyone who loves a Great Mother Goddess saying things like that?”

And my self, she says, “Heck, no, Athana, anyone who lives by the Way of the Mother knows She’s a mother first and we’re all Her kiddies. And like any healthy mother She’s in love with every one of us 100%, even if we have bug breath and camel hair. Not only that, She expects all of us to adore each other just the way She adores us.”

RUNNING Scared BACK TO DADDY 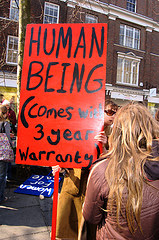 “Jürgen Habermas, a veteran leftist German philosopher stunned his admirers not long ago by proclaiming, ‘Christianity, and nothing else, is the ultimate foundation of liberty, conscience, human rights, and democracy, the benchmarks of Western civilization. To this day, we have no other options [than Christianity]. We continue to nourish ourselves from this source. Everything else is postmodern chatter.’” [From foreignpolicy.com, June 2007]

Like Jumpin’ Jehovah was out on the moutaintop pumping his fist in the air hollering “Rah, rah, rah, Human Rights! Freedom! Let’s hear it for liberty and justice for all!”

Not. For example, Jumpin' J. gave a fig about slaves and slavery.

Not. Jesus gave a fig alright, but it was about proper manners, not morality: "Your male and female slaves are to come from the nations around you; from them you may buy slaves….” Jesus speaking in Leviticus 25:44.

And here, for your reading relish, are a few more cute passages about Jumpin' Jehovah's "liberty, conscience, human rights, and democracy" for all:

Genesis 20:17
"Then Abraham prayed to God, and God healed Abimelech, his wife and his slave girls so they could have children again." [Oh, wow! Healthy at last so I can die in slavery and childbirth! O praise the lord, praise the lord!]

Genesis 39:17
"Then she told him this story: 'That Hebrew slave you brought us came to me to make sport of me.'” [How about freeing your slaves, dudette? How about standing up against the entire rot that is human slavery?]

Genesis 20:14
“Then Abimelech brought sheep and cattle and male and female slaves and gave them to Abraham, and he returned Sarah his wife to him.” [And so where’s Jumpin’ Jehovah? Why isn’t the god of “liberty, conscience, human rights, and democracy” telling Abe to spit in Abim’s face and rip those slaves away and set them free? Why isn’t Jumpin’ J giving moral leadership here re: the whole sink-hole institution of slavery? Huh? Huh?]
_________________
Thnx to andy dyer for the pic
Posted by Athana at 6:07 AM 5 comments:

GODDESS Before THE PHARAOHS 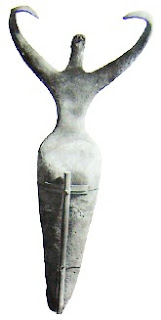 If you've never seen this exquisite Goddess from all angles before, here She is in all Her glory: front, back and side.


This of course is the famous predynastic Egyptian bird goddess. She's 11.7" high.


Made of baked clay, She wears a white dress below the waist. Her body is red and Her long black hair falls onto her neck.


She's so carefully fashioned She even has tiny fingers and thumbs incised onto her tiny hands. Although She has a bird's beak, She has no other facial features.


Before the Pharoahs ever set foot on Egyptian soil, before war and slavery were invented, before the days when snooty snobbism hit the deck, this Goddess was loved and adored by the people of Egypt.
Posted by Athana at 2:03 PM 15 comments: