flipping SANTA INTO A MAN'S BOD 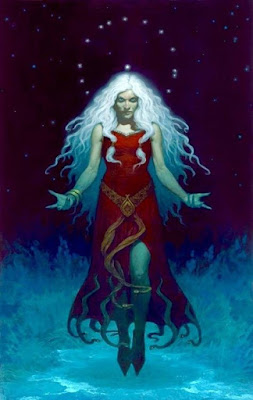 Somewhere in the distant, foggy past, someone flipped Santa into a man’s body.

In actuality, Santa was the Germanic Goddess Holda, who during the Christmas season brought gifts to all good children.
Santa Holda flew through the air in a wagon stuffed with Christmas goodies, and drawn not by reindeer but by birds.

"Before she suffered a savage smear campaign at the hands of church and state alike, much evidence indicates that Holda-Perchta was a magnificent goddess, simultaneously both powerful and loving.
"Above all she was powerful. One of her most vital tasks was keeping the earth fertile enough for crops and plants to grow and flourish, a task she accomplished by traveling the earth ... every year for the twelve days between Christmas and Epiphany.
"She also seems to have been the original Santa Claus, showering children the earth over with gifts at the winter solstice."
~ From *Breaking the Mother Goose Code*, 2015, John Hunt Publishing.
To buy your copy, click on the picture below and to the right.
Posted by Athana at 7:37 AM