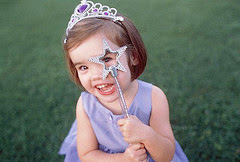 Heard the stuff about cell phones bumping off the bees? Here's an interesting take on the issue:

What if we all decided not to work on the assignment of blame, as the dominator culture would like us to spend our time doing, and instead, like witches who threaten the established mentality by not only thinking outside the box but sometimes using it as a container instead of a cage...

what if we forsook blame and began to seek how we can help the bees, both escaped and wild, and the other members of the body of the Goddess,such as, not cutting down the apple trees and laying out asphalt, planting flowers that are bee, hummingbird, and butterfly friendly (a hard task because you can't sell bees, hummingbirds or butterflies, so this is a waste of time and space and an offense against capitalism)

and the ultimate offense: don't buy anything you don't need. if you need a cellphone, buy it. If you don't need a really fancy upscale phone and the old one still connects you with friends and family, keep the old one. Ditto for the car. Ditto (a wonderful goddess who makes more of a good thing) for the new "whatever" that you buy only to assure yourself that you still have some choice left in the world.

the mainstream culture does not like women who say no, especially when asked to hand over her money.

witches bend reality, remember that one? It's not hard when what we are supposed to believe is reality is actually a manipulation technique that was cooked up in the knot on the upper end of the patriarchal neck.

Rainbow bubble ecstasies to us all,

~From the rcgi (reformed congregation of the goddess international) news group
Posted by Athana at 6:06 AM 4 comments:

Bully ON THE BLOCK 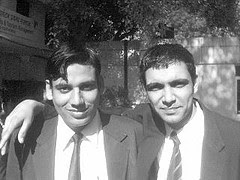 The VA Tech story is plastered all over our news to blind us to two gaping holes just shot into our national landscape:

(1) Partial-birth abortions made illegal last week. So now, if you need an abortion to save your life, too bad, sucka. Die, girl, die!

(2) Six fired US Attorneys: Why’d the White House fire them? Because they were investigating friends of the White House. Last Thursday the Senate grilled the firer, Mr. Alberto Gonzales. Did the mainstream news cover it? Hahaha, hardy har har! 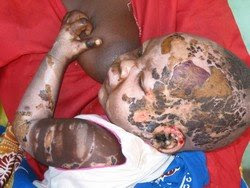 Why are we mourning for Virginia Tech as if the sun had died? Haven’t the Mother’s children been dying dirty deaths all month and all year? Aren’t Her children our children?

So I was a bit taken aback to see the news saturated with these few Virginia deaths when so many have been ignored.
Posted by Athana at 1:08 PM 4 comments: 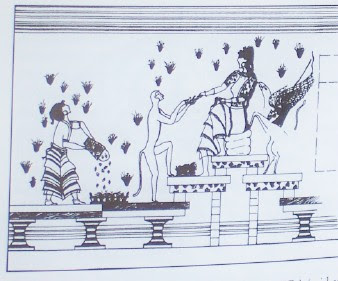 And you thought Pandora a mere woman and the root of all our troubles! It's called "smear campaign" -- as the following excerpts from Jane Ellen Harrison show:

"Jane Ellen Harrison* turned to the repertory of vase-painters to shed light on aspects of myth that were left unaddressed or disguised in [Greek] literature. The story of Pandora was repeated on Greek ceramics.

"On a fifth-century amphora [vase] in the Ashmolean Museum ... the half-figure of Pandora emerges from the ground, her arms upraised in the epiphany gesture, to greet Epimetheus. A winged ker with a fillet hovers overhead: ‘Pandora rises from the earth; she is the Earth, giver of all gifts,’ Harrison observes.

"On another vase showing the fashioning of Pandora she is inscribed with her alternative name: [A]nesidora (‘who sends up gifts’). ‘Pandora is a form or title of the Earth-goddess in the Kore form, entirely humanized and vividly personified by mythology,’ Harrison notes (p. 281).

"[Harrison] quotes a scholium on a passage of Aristophanes mentioning a sacrificed white-fleeced ram to Pandora: ‘to Pandora, the earth, because she bestows all things necessary for life’.

"Thus Harrison concludes ‘in the patriarchal mythology of Hesiod her [Pandora's] great figure is strangely changed and minished. She is no longer Earth-Born, but the creature, the handiwork of Olympian Zeus’ (Harrison, p 284)." 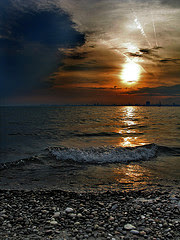 If we can’t persuade people to stop pounding on others, our only choice is to box them away where they can’t pound. Far from being ugliness or revenge, this is plain commonsense.

Since George W. Bush and Company have hurt, maimed, tortured and killed millions -- and continue to do so -- through not one but many avenues of ugliness – we must box them up.

Through their anti-environmental actions, through their love of fighting over talking it out, through their crushing of our U.S. Constitution and government, through their inability to put themselves into the shoes of others and to see the needs of the seventh generation, they have pushed us to our limits.

Their thumbing their noses at the environment might have pushed the Earth over the edge. As duff wrote yesterday, “…some climatologists predict: ‘...before this century is over, billions of us will die and the few breeding pairs of humans that survive will be in the arctic region where the climate remains tolerable.’ THE REVENGE OF GAIA, by James Lovelock, 2005.”

The Great Earth Mother speaks: Now is the time to rope Bush & Co., hog tie them, and drop them behind bars. If and when they show clear signs of rehab, then and only then should we untie them.

For the love of humanity, is there anyone out there with enough courage and intelligence to get these people put away where can’t blow billions of us off in an easy afternoon’s romp through the power halls of the planet?
Posted by Athana at 8:19 AM 3 comments: 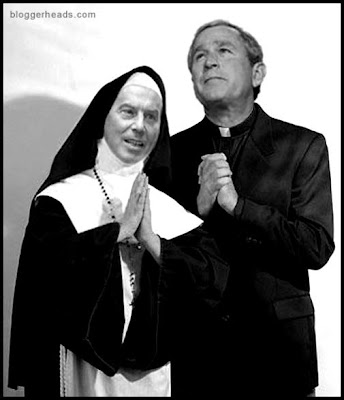 Is democracy possible for nations thickly under the thumb of Jehovah, Allah or Yahweh ? Elie Elhadj says "Not!":

"Elie Elhadj, Ph.D., explains why … a democratic Arab-Muslim {American} nation is nothing but fantasy. "Arab {American} people obey a hierarchical authority…. Muslim Arab {American} political and religious leaders raise … Islam {Christianity} in a shield against democracy … to protect their power.

Constant preaching by Islam's {America’s} religious leaders, instructing Muslims {Americans} to blindly obey their leaders, has created an attitude of political quietism in regard to the tyranny of Arab rulers {pResident George W. Bushlet}…."

Shamelessly adapted from a book review of The Islamic Shield: Arab Resistance to Democratic and Religious Reforms, by Elie Elhadj. Go HERE to see the entire review
_______________________
Thnx to bloggerheads.com for the foto
Posted by Athana at 5:03 AM 1 comment:

Email ThisBlogThis!Share to TwitterShare to FacebookShare to Pinterest
Labels: Democracy and Abrahamaic religions 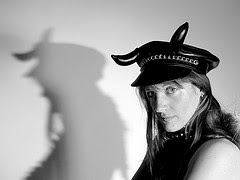 Once upon a time, we all knew the Earth was our Mother. We worshipped Her as sacred deity. Then yaj the Jealous* roared into town on his Harlie.

He bellowed, “Mother Earth is dirt!” He jerked his index finger at humans and said, “You! ‘Subdue’ Her.”**

Feast your eyes on a few synonyms Microsoft Word keeps in its synonym drawer for 'subdue': ‘crush,’ ‘subjugate,’ ‘defeat.’

To Christians the Earth is a pitiful pile of dirt so dangerous it needs to be kept under lock and key. Oh – but it’s a handy place to throw all your kadiddle and dung.

MY QUESTION: If the world had never known christianity, islam and/or judaism, would we today be facing death by global warming?
_________
*yaj is yahweh/allah/jehovah, who pretends to be three different gods, but is really one. His other name is Jealous (“[T]he LORD, whose name is Jealous, is a jealous God.” Exodus 34: 14)[yEAH, gO rEAD THE bIBLE -- hE rEALLY dOES sHOUT oUT hiS nAME lIKE tHAT]

Go HERE for an excellent photo of the seated Goddess of Catalhoyuk -- the one on the throne flanked by lions (or leopards). It's taken in the museum in Ankara where She now resides.

What you see here is only a small version of the real photo, which is at pbase.com.
Posted by Athana at 1:14 PM 1 comment:

Under THE THUMB OF WOMEN 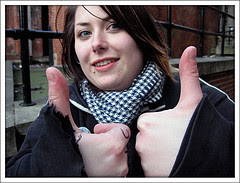 “You're right, we do need to throw out the entire judeo-christian system but my fear is that to replace it with a matriarchal system would be a new face to the same thing…. Peace to you, Bes”

Thanks Bes for your thots.

It seems your hidden assumption is that a Guiding Mother Goddess would drop men under the thumbs of women.

Healthy mothers don’t stand aside while sisters sit on brothers. Likewise a Guiding Mother deity wouldn’t allow her human daughters to throw around her human sons – or vice versa. Like all healthy mothers, She teaches us to treat each other with unconditional love and regard.

Bes, I don’t think pantheons of co-equal male and female gods would produce equality among humans. As you’ve pointed out, men and women have different skills – and mothers rule when it comes to role-modeling for all of us.

It’s hard to imagine this new world I’m painting -- we’re so steeped (imagine a tea bag in hot water) in our violent, winner-take-all, me-first bully world of sexually-uptight boot-lickers.
______________
Thnx to EnBee for the foto
Posted by Athana at 6:56 AM No comments: 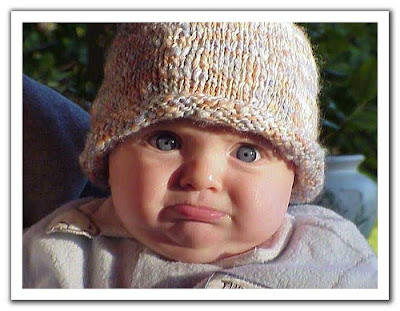 “The very democracy you claim to defend,” she says, “you want to give to everyone EXCEPT the Christians. You want to tear us down in any way that you can---and don't even deny it.”

“Dear Doris,” I replied. “No, I don't deny it. I'd adore it if Christianity were deep-sixed.

“Notice I didn't say ‘Christians deep-sixed.’ My religion doesn't spin tales about how others will be treated to zillions of years of torture after ‘good’ people are ‘raptured’ up to heaven.

“It's simple, Dorrie: you're worshiping the same primitive god Osama bin Laden does. Think upon it: your bible men strut around in Osama's pretty desert skirts, his turbans, his beard, on his desert sands, and with his tantrum-throwing, two-year-old-baby 'god' at their sides.

“Give him up, Dorrie, and dance on over here to our side. Let’s fight that baby-god sucker together, and clean up the planet.” 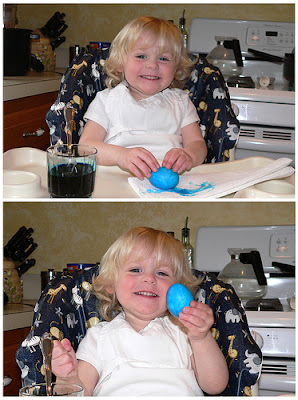 Well, Dears, what are your Easter wishes this year?

Mine: The Bush Crime Family impeached and put behind bars for forever and ever, amen; Nancy Pelosi bringing the War to a screeching halt, may the Goddess Oestre see to it all toute suite, so be it, amen and amen again! 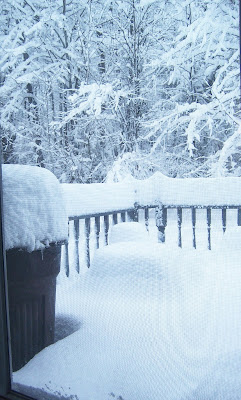 When the Goddess handed out Spring, Maine was at the tail end of the line. 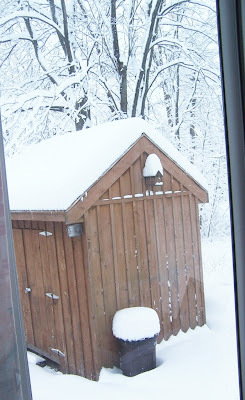 BETTER OFF without RELIGION?

"The motion was: 'We'd be better off without religion.' On his side [Richard Dawkins the author of The God Delusion] were Professor AC Grayling and Christopher Hitchens. Against were Baroness Julia Neuberger, Professor Roger Scruton and Nigel Spivey. The incomparable Joan Bakewell was in the chair. At these debates, styled along the lines of Oxford and Cambridge debates but disappointingly less hecklesome, a vote is taken at the start and another at the end."

So who won? Go HERE to see

Of course as I've argued before, no one in any modern complex society can argue against Goddess religion -- 'cause no modern complex society has ever tried it before. And Richard Dawkins poor man is steeped in religion up to his eyeballs. His is called "Science."
________
Thnx to claymor for the foto
Posted by Athana at 4:08 AM 6 comments: 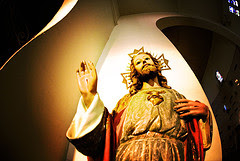 “NEW YORK (AP) -- An anatomically correct chocolate sculpture of Jesus Christ infuriated Catholics and even led to threats, but the artist says offers to buy or exhibit the piece have been pouring in.” MORE >>>>

I don’t get it. Nobody gets exercised when viewing an “anatomically correct” [i.e., nude] sculpture of Goddess. What's up with Jesus's body? Some physical defect Daddy God's hidden from us all these years? Are Catholics ashamed of J's beautiful body?
Posted by Athana at 1:29 PM 4 comments: