Switching FROM GODS TO GODDESSES 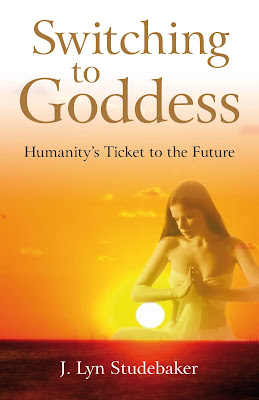 On this blog the goal is to switch from daddy gods back to Guiding Goddesses. Until it's guided by Goddesses, we'll never have a healthy world.

As things stand now, all the daddy gods who guide us are -- think about it -- vicious, violent and skanky-janky war gods

If you had a car programmed to wheel you down roads leading to war zones, wouldn't you junk it?

And if you spotted a car designed to drive you where people were fascinating, fair, rich and decent risk takers -- wouldn't you grab it in a New York minute?

Thing is, boatloads of evidence show that in the past, societies organized around Guiding Goddesses were just that: places full of fab, fascinating, fair, risk-taking, rich people (with not just a few, but everyone rich).

Of course I can't pump out all this evidence in one itty bitty post. But for more info, prowl around this blog's past posts.

Or, place your paws on a copy of Switching to Goddess: Humanity's Ticket to the Future.* Switching tells what the past was like, how we lost it, and how we can get it back again.

What kinda wigs me out is that the very slime-ball forces that ripped our Guiding-Goddess Paradise out of our hands in the past, are prancing around now trying to make certain we don't recoup it. See yesterday's post.

Email ThisBlogThis!Share to TwitterShare to FacebookShare to Pinterest
Labels: Blog's goal is switching, Goal of this blog

Sticking PINS INTO THE BELLY OF THE CHURCH

I am appalled at the way the Christian Church ran like a Mack truck over California law Nov. 4. This morning the New York Times even saw fit to do a front-page article on it.

I know we're all fed up with fear, but this is something to be afraid of. And I don't see people being nearly afraid enough.

The Christian menace is gaining on us again.

Pull out and reread your copy of John Sugg's Christian Reconstructionists Believe Democracy Is Heresy, Public Schools are Satanic, and Stoning Isn't Just for the Taliban Anymore -- And They've Got More Influence Than You Think. (Church and State 59, 2006).

Who do you think pushed the Christian Dudley Dubya into power? Who almost plunked Christian extremist Sarah Palin half a heartbeat away from the American Presidency?

Reread your school history texts. As little as a few centuries ago, this menace the "Church" kept us like slaves. American colonists failing to show up in church Sundays were pitched into jail.

And then there's the Salem "witch" trials. Christians actually had the political power to murder you if you said something they didn't like, or if you looked at them the wrong way.

I call for the immediate drafting and passage of laws that shoot Christian deacons, bishops, pastors, and even popes straight into federal prison if and when they use their organizations to meddle IN ANY WAY in civil politics. Even if they so much as drop one puny political word to anyone in their organizations, they should be fined like thieves.

And there should be strict and powerful laws making certain this happens.

Let's nip these dangerous thugs in the bud before it's too late.
Posted by Athana at 8:05 AM No comments:

Email ThisBlogThis!Share to TwitterShare to FacebookShare to Pinterest
Labels: Church and state separation, Laws to protect government against Christians, Prop 8 in California, Separation of church and state 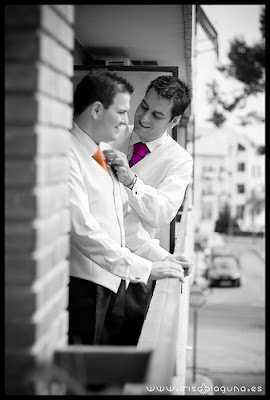 As we all know, the ancient Pagans were so ho-hum about homosexuality they didn't even have a word for it. To them it was merely one side of sexuality, no big fat deal.

Then, about 2000 years ago, YAJ* two-stepped into the picture. And in order to yank power away from Pagans, YAJ specialized in carving people up into separate groups and then pitting the groups against each other.

So 2000 years ago, YAJ, he said, "Sheeple? No longer are you one sheeple. Henceforth I divide you into hets and homos. What's more, all homos are born to be hit, batted, and slapped around by hets. Got it?"

Even though this was 2000 years ago, YAJ still holds most of us by the short hairs.

On Tuesday, Nov. 4, gays and lesbians in California had their marriage rights ripped away. Would you fall over in sorry surprise if I said it was Christians -- mostly Mormons -- who funded the fight to filch these rights? No? (Ha! I knew my readers were sharper than your average blog babies.)

YAJ forever has his fingers in every gay and lesbian pie. Here, though, is the really skanky part about YAJ's dodo dance this time around: he got Mormons in Utah to dance over to CA and pour money into CA to dictate CA law.

So I say, CA, are you going to take this lying down like a mini mouse? Sweetheart, you need to do a better job of standing up for your rights!

"At least one donor, Alan A. from Lindon, Utah gave $1,000,000 to prevent same-sex couples two states away from enjoying legally-wedded bliss"

See also "Mormon Church steps into the Prop. 8 battle." _________________
*YAJ is short for YahwehAllahJehovah. Most think YAJ is three separate gods, but he's not. He's just one schizoid god with three separate personalities. Unfortunately for us, these three personalities are always at war with each other, dragging us into war after war on his/their coattails.
________________
thnx to SiRi for the foto; go HERE to more of his work.
Posted by Athana at 8:12 AM No comments: 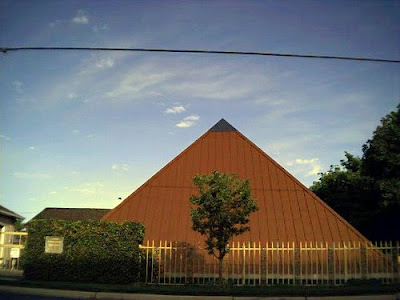 Much to the horror of Christians in Pleasant Grove City, Utah, the Supreme Court recently ruled to allow the Church of Summum to post its Seven Aphorisms in the town park alongside the Ten Commandments:

“They’ve put a basically Judeo-Christian religious text in the park, which we think is great, because people should be exposed to it,” Mr. Temu [of the Summum Church] said. “But our principles should be exposed as well.”

Su Menu, the church’s president, agreed. “If you look at them side by side,” Ms. Menu said of the two monuments, “they really are saying similar things.”

The Third Commandment: “Thou shalt not take the name of the Lord thy God in vain.”

Michael W. Daniels, the mayor here, is not the vibrating sort.

Sitting with the city attorney in a conference room in City Hall, Mr. Daniels deftly drew several fine lines in explaining why the city could treat the two monuments differently....

VOTE FOR THIS MAN 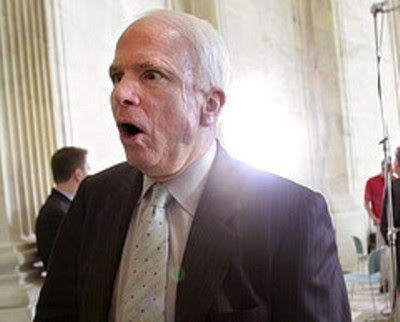 If you want four more years like the last eight, vote for this man, Mr. John McCain.
Posted by Athana at 8:39 AM 3 comments: