YULE joy TO ALL! 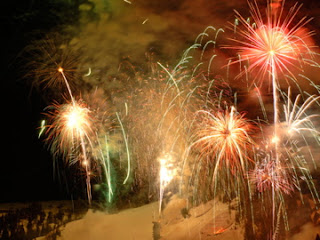 From a site about Yule in Iceland, one of the last European countries blistered by Christianity:

“In early Medieval times, the Yule feasts … lasted for several days and included dancing, games and sports and other entertainment.

“In some areas the local folk gathered together and held a joint feast … called Jólagleði, Yule Joy. 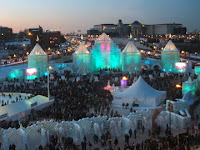 “These feasts continued until the Reformation….”

I feel cheated!  Imagine stomping around in Medieval Iceland around this time of year.

For days you rumba with one big, happy glob of people, laughing and pigging out on fine food and drink, singing and dancing all day and into the night; playing cards, chess, spin the bottle, downhill skiing and other snow games; watching plays, puppet shows, a sword fight or two, acrobatics, jesters juggling jugs or tickling your funny bone in a few dozen other ways.

And of course all this is free, and you get off work for two weeks to enjoy it (with pay).

And what did we trade this in for?  The War-God holidays: Christmas, Hanukah and Kwanza.

Christmas could be the worst: weeks of blood, sweat and tears agonizing over gifts, menus and decorations.  And this angst ends in what?  At best, a one-day snooze fest with people you share zilch in common with (I can almost hear your Uncle Albert snoring on a couch in front of the Disney Gang).

Well, soldier on, dearies.  Hopefully some day we’ll ditch the War-God holidays and bring back the old joy-filled Yuletide festivals.  May your Solstice and Yuletide season (against all odds) be filled with dancing, laughter, and a kiss or two under the mistletoe.

___________
The second foto above comes courtesy of Wikipedia; go HERE to see an enlarged version of it.

Go HERE to see the source of the first foto.

Posted by Athana at 8:08 AM No comments:


America’s Guide Book for Living: What It Says about Children:

The god Nick worships said, “Take your son Alex, the son you love dearly, knife him to death, and then roast his body over a fire.” Genesis 22:2
So Nick took a kitchen knife, and got ready to slit his son’s throat.  Genesis 22:10
The god Brittany worshiped thought she was bad, so he killed her.   Genesis 38:7

The god Andy worshipped told him that if he didn’t do what he said, he would kill Andy’s son Logan.  Exodus 4:23
The god Amanda worshipped got mad, and so he went through the city she lived in and killed the oldest child in each household, including her three-year-old, Madison.  Exodus 12:12
The god Claire worships waited until midnight last year, then killed the oldest child in each household in her country.  Exodus 12:29

And this is just the first two books out of 66!  There’s lots more where this came from!!!
Posted by Athana at 7:23 AM No comments:

men’-tal ill’-ness.  noun.  Professing shock and outrage when your society -- which harbors a rule book for living* that chugs on and on about almost nothing but slaughter and violence – violently slaughters 20 innocent children.

men'-tal health.  noun.  Switching from one's primitive, violent desert gods to a loving Great Mother Goddess.
_______________
*This rule book is known as the "BibleKoranTorah" (although some see these as three separate books, they’re really only one book – about a primitive desert dude named Abraham). For a handy-dandy “short list” of cruelty in the BibleKoranTorah, go HERE.

Mention Death, and western society morphs into a gigundo ostrich with its head encased in cement. 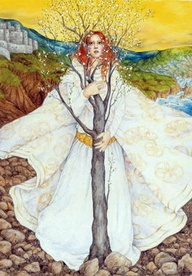 Heide Goettner-Abendroth thinks fairy tales contain hidden messages from our pre-patriarchal ancestors.  In The Goddess and Her Heros*, Heide says most fairy tales formerly contained a death/rebirth part.  Over time, however, that part was stripped away.
_______
* "Heros" is a Greek word.  A heros was one who entered into sacred marriage with the Goddess (at certain times and in certain societies, of course).

Posted by Athana at 9:45 AM No comments: