"...the fact is that almost all new religious movements fail....

"The sociologist Rodney Stark is one of the few people who have been willing to develop specific ideas about what makes new religious movements succeed.

"'The main thing you've got to recognize,' he [Stark] told me, 'is that success is really about relationships and not about faith. What happens is that people form relationships and only then come to embrace a religion.'

"'Something else: give people things to do.... The Mormons are great at giving people things to do too. You know, they not only tithe money but they also tithe time. They do an enormous amount of social services for one another, all of which builds community bonds. It also gives you this incredible sense of security—I'm going to be okay when I'm in a position of need; there are going to be people to look out for me. That makes a difference.' " 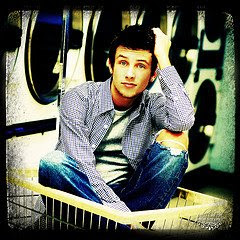 I adore Christians, Muslims, Hindus, Jews and Zeus worshippers. They're all sweet, lovable beauties born out of the Goddess.

It's their earth-killing, people-eating "religions" that make me want to punch holes in pillows. 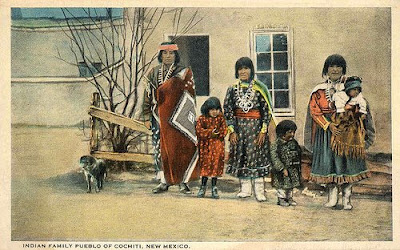 Buried in an old box of books I snapped up at an auction last week, I discovered a great old 1934 book called Tales of the Cochiti Indians. These stories were collected by the anthropologist Ruth Benedict. Nestled in this book are 10-15 stories about the Cochiti Mother Goddess. Here, for your reading pleasure, is part of one:

"The Origin of Death

"They were coming up from Shipap. One of their children became sick and they did not know what was the trouble with him. They had never seen sickness before. They said to the Shkoyo (curing society) chief, 'Perhaps our Mother [Goddess] in Shipap will help us. Go back and ask her to take away this trouble.' He went back to our Mother and she said to him, 'The child is dead. If your people did not die, the world would fill up and there would be no place for you to live. When you die, you will come back to Shipap to live with me. Keep on traveling and do not be troubled when your people die...."

This story is an "origin tale." Benedict collected these stories in the summer of 1924, from old Cochiti. Why old people? Because "in Cochiti the first age group to be systematically sent to Government boarding school is now about 35 years old, and below that age even the commonest tales are known only by hearsay."

Good reason for this: Once in the "boarding schools," the Indians of the American Southwest were tortured until they cried uncle (i.e., agreed to skip out on every last inch of their old Mother Goddess ways).

I guess we're lucky that plucky old anthropologists like Benedict waltzed in and snapped up the last traces of the indigenous American Mother Goddess. Otherwise, instead of knowing next to nothing about Her -- we'd all know *totally* nothing.

But it makes you wonder, doesn't it? How many hundreds of thousands of Mother Goddesses around the world got pitched into the scrap bag before anyone could save any trace of them?
_______________
thnx to teyacapn for the foto of the Cochiti family. Go HERE to see more.
Posted by Athana at 10:29 AM No comments: 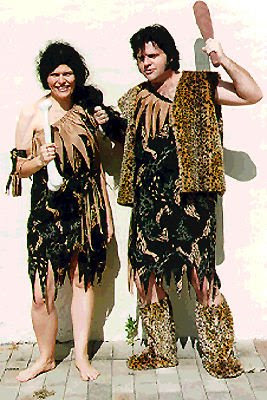 Wowza! Here's a linguist says some of the words we use today were used back in the days of the cavewoman: I, who, we, thou, two, three, five.

HITCH Beaten UP BY CHRISTIAN THUGS 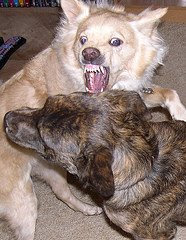 If Christopher Hitchens was my hero before, he's more so now. Last week he risked his life to stand up against Christians and Muslims terrorizing Lebanon. As a result, he was beaten, kicked and smacked in broad daylight, by a gang of Christian/Muslim thugs, on a major street in Beirut:

Christopher was encircled by four or five of them. They were geared up to smash him, and I reached for his hand to pull him away. One of the toughs clawed at my arm and left me with a bleeding scratch and a bruise. I expected a punch in the face, but I wasn’t the target.

Christopher was the target. He was the one who had defaced their sign. One of the guys smacked him hard in the face. Another delivered a roundhouse kick to his legs. A third punched him and knocked him into the street between two parked cars. Then they gathered around and kicked him while he was down. They kicked him hard in the head, in the ribs, and in the legs.

Jonathan and I had about two and a half seconds to figure out what we should do when one of the SSNP members punched him in the side of the head and then kicked him.

Kiddies, our entire little earth village is being beaten to a pulp -- not just by Allah, but by Jehovah and Yahweh too.

These three are one and the same: the god of Abraham, Yahweh/Allah/Jehovah, or YAJ for short.

It was the father/sky/war god ancestors of YAJ who beat the Great Goddess into the dust. When we centered ourselves around Her, we lived in utopian communities.

For proof, read Switching to Goddess: Humanity's Ticket to the Future, on sale at most online bookstores. And if your local land-based bookstore doesn't carry it, I'm sure they'll be glad to order a copy for you.

So scoot on out and buy this book. You owe it not only to yourself, but to your entire little earth village.

Interestingly, Hitch did not fight back. What was this about? Do you think it came from a place of strength, or of weakness?
___________
thnx to matthewPHX for the foto; go HERE to see more.
Posted by Athana at 7:27 AM 2 comments: