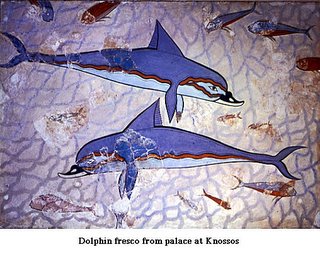 Over the past several months, I've blogged often about the "Goddess=Peace/God=War Equation." One of the reasons people don't know about this equation is that the patriarchy sweats bullets trying to squelch your knowledge of it. Take Wikipedia, for example, the online encyclopedia. In the article on the peace-loving, Goddess-worshipping ancient Minoans, some patriarchal had written a section called "Warfare," in which he maintained that the Minoans did war! He gave one source for his work, and it didn't even exist (I even checked WorldCat.) So I replaced his section with the following:

"In both past and present, most have maintained that the Minoans failed to practice warfare. In 1967, Mellersh said, “As for war, we have observed that Crete was a well-protected island. There could have been internal strife, but there is no specific sign of it” (1967: 15). In 1971, Hood said, “Their (the Minoans’) chief towns are rarely situated with an eye to defence, while many are on flat ground by the sea or near it” (1971: 118). In 1976, Willetts said, “The siting of the three major palaces in the centre of the island is inconsistent with any assumption of political rivalry and their defensive features are quite rudimentary. Even the ring wall at the residential area of the palace at Mallia can be adequately explained by its proximity to the shore” (1976/1995: 128).

"Furthermore, no evidence exists for a Minoan army, or that the Minoans tried to dominate people outside Crete. No clear depictions of warfare exist in the large volume of Minoan art. “Although a few archaeologists see war scenes in a few pieces of Minoan art, others interpret even these scenes as festivals, sacred dance, or sports events” (Studebaker, 2004, p. 27).

"In 1998, professional archaeologists met in a conference at the University of Liege in Belgium, to discuss the possibility that past archaeologists had erred in their conclusions that Minoans possessed a long-term peaceful civilization. Most came away feeling that the evidence for Minoan war was scant:

"Archaeologist Keith Branigan noted that 95% of so-called Minoan weapons possessed hafting (hilts, handles) that would have prevented their use as weapons (Branigan, 1999).

"Archaeologist Paul Rehak maintained that Minoan figure-eight shields could not have been used for fighting or even hunting, since they were too cumbersome (Rehak, 1999).

"Archaeologist Jan Driessen said the Minoans frequently show ‘weapons’ in their art, but only in ritual contexts and that “The construction of fortified sites is often assumed to reflect a threat of warfare, but such fortified centers were multifunctional; they were also often the embodiment or material expression of the central places of the territories at the same time as being monuments glorifying an merging leading power” (Driessen 1999, p. 16).

"Archaeologist Charles Gates said: There are other cultures who leave war out of their art. We know, however, of no other society with as much art as the Minoans had, who leave war and rulers out of their art: “Indeed, the lack of images of warfare and even of the ruler is not an exclusively Minoan characteristic. Uniquely Minoan, however, is the absence or ruler, warfare and hunting iconography within a huge repertoire of images” (Gates, 1999, p. 281)

"Archaeologist Kieth Branigan said: “The overall conclusion which has emerged from this review is one which, frankly, I was not expecting when I first decided to write on this topic. [T]he quantity of weaponry, the impressive fortifications, and the aggressive looking long-boats all suggested an era of intensified hostilities. But on closer inspection there are grounds for thinking that all three key elements are bound up as much with status statements, display, and fashion as with aggression…. Warfare such as there was in the southern Aegean EBA [early Bronze Age] was either personalized and perhaps ritualized (in Crete) or small-scale, intermittent and essentially an economic activity (in the Cyclades and the Argolid/Attica)” (Branigan, 1999, p. 92).

"In her paper “Where’s the Loot?” archaeologist Krzyszkowska says, “The stark fact is that for the prehistoric Aegean we have no [sic] direct evidence for war and warfare per se [sic]” (Krzyszkowska, 1999).

"With Minoan studies, one must be especially careful to cite references to back up claims. One must also cite references from qualified scholars, since the area attracts writers with varying backgrounds and levels of expertise – or lack thereof. Many secondary sources are written by non-archaeologists and/or writers with little comparable experience or training.

I'll keep you posted on whether or not my new section gets by the Wikipedia Police. So far, my second-paragraph statement on the Goddess is still standing ("One of the outstanding features of Minoan Civilization was their apparent worship of female, not male deity.") -- only, I'm sure, because I referenced it with a source as powerful as a cannon-ball.

_____
Minoans often depicted dolphins in their art.
Posted by Athana at 4:45 PM

Wonderful work Athana it shows to what depths they will sink putting in quotes by people who don't exist.

PS did you see the Mayan Stella they have found with a woman's head on it, they seem to think she may represent a goddess or a queen.

Athana said...
This comment has been removed by a blog administrator.
6:54 AM

Yes, the idea that the most delightful civilization of the Bronze Age could have been a peaceful society run by women is just something that patriarchals cannot bear. They're constantly trying to poke holes in the facts. Also, I'm truly amazed at how many of the ostensibly scholarly works on the Minoans are written by people with no real credentials to write them. The book this writer cited was something like "Minoan Flower Power." I looked everywhere for a citation of it, and found nothing. Who knows -- maybe he got the title wrong. But even so, the title makes it sound like a book written by one of the many non-experts who delight in taking on the Minoans. Only this one didn't even pretend to sound scholarly.

I'm starting to think the Goddess movement needs to address Wikipedia head on. Maybe some of us should come up with a statement of some sort? And see if we can get support for it from Z, Shekhinah, Starhawk, etc? What do you think?