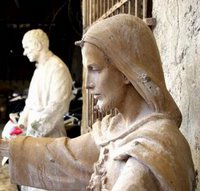 Today is the day the god boys pay their respects to one of the coolest of their dudes, Jesus Christ. Although this guy isn't as perfect as the god boys like to think he is, he is very Goddess-like in many ways, and I approve of that. He's still a man operating without a Goddess, however, and as such is seriously handicapped. Not only that, he has this warrior dad who's a holy terror (Yahweh/Jehovah/Allah).

The Wikipedia article on JC is interesting for three reasons. One, there's so much discord about this guy that the Wiki Police have had to lock up the site (I shudder to think what kind of mayhem went on before that happened). Second, the Muslims lay claim to JC, too. Third (and this is something I've posted on before), even many Christians admit that JC was probably not a real dude, but just a prototype.

Anyway, to cut to the chase, here are some snippets from the Wikipedia article on JC.

"From Wikipedia, the free encyclopedia.
(Redirected from Jesus Christ)
Jump to: navigation, search

"In order to deal with vandalism, editing of this page is temporarily restricted to users who are logged into an account that is not new. Please discuss changes or request unprotection.

"Many noted critical historians ... argue that Jesus lived from about 8-4 BC/BCE to 29-36 AD/CE.... After his death numerous followers spread his teachings, and within a few decades Christianity emerged as a religion distinct from Judaism.

"In Islam, Jesus (called Isa) is considered one of God's most beloved and important prophets, a bringer of divine scripture, and also the messiah; although Muslims attach a different meaning to this term than Christians as they do not share the Christian belief in the divinity of Jesus. The Qur'an, Islam's holy book, states that the crucifixion was a divinely-created illusion; that Jesus was not killed, is alive in heaven and will return to the earth in the company of the Mahdi once it has become full of sin and injustice."