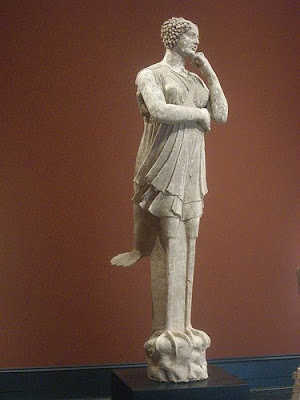 Last night after watching the award-winning movie Lonesome Dove, I cried so hard a river now runs through my living room.

What is it about the ending of this movie that makes it almost as bad as watching a best friend die?

And then it hit me. I think Lonesome Dove taps into the old Goddess world.

Lonesome Dove happens in the Old American West. When two ex-Texas Rangers, Augustus "Gus" McCrae and his longtime partner Woodrow Call drive cattle to Montana, they are joined not only by several cowhands but also by Ms. Lorena Wood, the prostitute half this group is moony-eyed over. Only after learning his old heartthrob Mrs. Clara Allen now lives near Montana, does Gus agree to ride along. One of the cowhands, a young orphan raised by Gus and Woodrow, finds out on the trip that Woodrow is his father.

On this blog, I have always said that compared to god people, Goddess people are sensual, nurturing, emotionally-mature risk-takers with galloping senses of humor. This is Gus McCrae to a tee. While Woodrow often pokes fun at Gus for Gus's love of pleasure, Gus pokes at Woodrow for being a party-pooper.

Gus loves love-making, but since Woodrow's long-ago fling with the orphan Newt's mother, Woodrow has been celibate. Whereas Gus is often seen lolling naked in a river chewing on a reed, Woodrow's never even seen without his hat -- let alone his clothes.

Gus nurtures like a Mother Goddess -- even when it leads to grief for himself. He nurses Lorena back to health after she's been manhandled by Blue Duck and his gang. This means bringing her along to Clara's ranch -- and may be partly why Clara cold-shoulders Gus's marriage proposal once again. The anti-nurturer Woodrow, on the other hand, can't even tell his own son he's his dad -- leaving Newt with deep scars.

As the Goddess is present all around us, so Gus is emotionally present, expressing his emotions easily, quickly and often -- to pigs if no one else is around. Woodrow is as emotionally distant as a sky god, never showing anything but anger. Woodrow rarely even speaks.

While Gus has a sense of humor in spades, not one drop of humor runs through Woodrow's daddy-god veins. Woodrow the god-man runs his cowhands like a dictator -- except for Gus, who "governs" himself. Gus is an emotional risk-taker; doesn't scare him a bit to ask women for love. Emotionally Woodrow is as dry as the desert he crosses with his cattle.

So. Anyone else a lover of Lonesome Dove? Do my ramblings here make sense?
_____
*Lonesome was first a Pulitzer-Prize-winning book. This book was made into TV mini-series that won seven Emmy Awards and was nominated for 13 others.
________________
Clips from Lonesome Dove
(Hit the triangle in the lower left until it becomes two vertical bars)

Now my curiosity is piqued, pignut. I might have to try Dead Man's Walk. I've tried other of McMurtry's books and haven't been able to finish them. But have not tried any of his Lonesome Dove prequels. Maybe they're different.