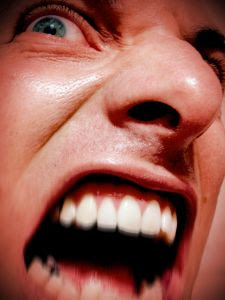 Here, at the specific request of certain trolls skanking under bridges at this site, are articles about how an excess of male hormones -- in both males and females*-- is associated with increased aggression:

This next article shows -- as the original post suggested -- testosterone-poisoned individuals, whether men or women [HELLO, DUDES. GET IT THIS TIME? MEN OR WOMEN? HOPEFULLY YOU WON'T MISS THE MESSAGE AGAIN], can be trained to overcome their disease:

This article is about

"a study on testosterone, sexual offense recidivism, and treatment effect among adult male sexual offenders which appeared in the journal Sexual Abuse: A Journal of Research and Treatment.

"There is well established evidence that the hormone testosterone, with its active metabolite dihydrotestosterone, influences both aggression and sex drive in human males.

"The purpose of the study was to examine the relationship between serum testosterone and sexual violence in a sample of adult male sex offenders attending an in-hospital treatment program.

"The sample for the study consisted of 501 adult male sex offenders voluntarily admitted to the Phoenix Program, an inpatient sex offender treatment program in Edmonton, Alberta.

"The authors suggest that the findings indicate that testosterone levels are not just associated with aggression and sex drive as separate entities but also to sexual aggression specifically.

"In other words, the intensive group therapy provided by the program appears able to intercede in the influence of testosterone on sexually deviant behavior."

_______________________
*The original post was about excesses of male hormones, in both men and women -- something that flew right over the heads of the trolls, even though they insisted they are all as smart as Socrates, and that they all read the post 100 times or more.
Posted by Athana at 5:18 PM

I can't believe there aren't a million nasty sniping responses by anonymous dudes..

Maybe Earthlings aren't doomed after all?

Wow - that Alan Alda article takes me back! It was in our text book for Human Sexuality in college (back in the early 80s) and it's as relevant today as ever.

First off all I would like to thank you for that great post. It's very interesting to read your posts. As I can see, a lot of people here knows much about ED treatment maybe they can help me. For a log time I can't decide what is better: to buy viagra, to buy cialis or to buy levitra? I found this Canadian pharmacy to buy all this things, so can somebody help me to make a decision?

You will receive no more than a 30-day supply of Accutane at one time.. Do not use buy accutane wax hair removers or have dermabrasion or laser skin treatments

Generic Cialis functions by inhibiting the action of an enzyme, known as PDE5. Generic Levitra helps increase the flow of blood to the penis, so it may help men with ED get and keep an erection that lasts long enough to have successful sex. Generic Viagra has helped millions of men with erectile dysfunction achieve improved erections. This pill is shown to help men get and keep an erection for successful intercourse.