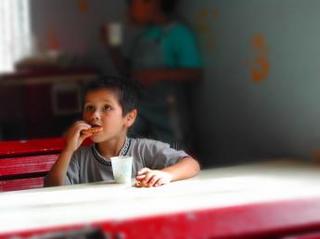 Yesterday, as I ate up the last of Kazuo Ishiguro's When We Were Orphans, I cried until my eyes were fat puffins. The mother of an English boy in 1930s Shanghai loved him so profoundly that she abandoned everything -- including her sanity -- to keep him alive and thriving. In a nutshell: after a Chinese warlord refuses to help her battle the Chinese opium trade, this mother smacks the bandit in the face. Feeling a touch miffed, the brute kidnaps her. She makes a deal: if he spares her son and pays for his education in England, she will become the warlord's sex slave. Although a leading Shanghai political and social figure, to protect her child this woman gives up her very sanity as the warlord treats her to whippings in front of dinner guests ("to tame the English woman"), and worse. Decades later, when Christopher "rescues" his institutionalized mother, she barely recognizes him.

My question: Why would mentally sane humans worship a Father god like the "I-am-jealous" Yahweh when they have a Mother God who loves them as much as this mother loved her child?!?

Let me give you the low-down, though: Ishiguro -- who also wrote The Remains of the Day and Never Let Me Go -- is HOT! Try him!
Posted by Athana at 7:16 AM

They just don't know. The patriarchy has done a good job of keeping them afraid of death and ignorant of Her love. That's why blogs like ours are important. We have to get the word out that She's alive and real and demands nothing of us to receive Her love.

You're oh so right, Morgaine. People don't know about Her, but, here we are to tell them! keep up the good work, and I will too. I love your last line: "She's alive, She's real, and She demands nothing of us to receive Her love."