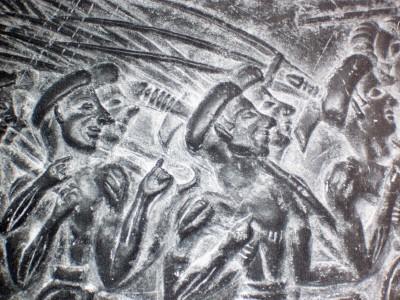 In this post, I respond to recent comments by Lisa. In the sense that they undoubtedly represent the views of many who visit this blog, Lisa's comments are excellent. They do, however, need desperately to be examined and challenged.

(Above is a 3,500 year-old picture of ancient Minoan men who have been described as singing, laughing, and possibly on their way to a harvesting festival):

Lisa: Wow, completely getting rid of any Masculine Divine? I don't know about that, lol. We'd just have to redefine God the Father, so our brothers will have a more healthy gender identity to relate to.

Lisa: Some sort of God the Father is necessary, just not the way it has become...

Lisa: Ironically, the way Jesus spoke about God was very similar to how many view the Goddess now.

Lisa: And why would you want to get rid of pain, even if you could? Pain is what we have to compare to happiness, to know we are happy. Pain is very grounding.

Lisa: I think that if men had no God the Father, they'd feel just as jilted and excluded as women do without God the Mother.

Athana: Maybe so, but choosing god is choosing war; choosing Goddess is choosing peace. This is shown repeatedly in the archaeological record.

Lisa: Why would we change the rules? Just because men have had God the Father for too long?

Athana: No. We'd change the rules because while Goddess means peace, god means war. It's in the archaeological record, which does not lie.

Athana: On the contrary, it's one of the most logical responses I know. It's all in the archaeological record. Where there's Goddess there's peace. Where there's god there's war. If we want war 'til the end of time, we keep the gods. If we want an end to war, we chuck the gods and breathe life back into the female divine.

Lisa: Mythos and god images were created for humanity to understand their place in this world.

Athana: And our place is peace. And the archaeological record shows a perfect correlation: Goddess-peace, god-war.

Lisa: I think that if we were to completely disregard the Divine in masculinity and males and not represent that, well that is "Patriarchy in a skirt," and just as damaging.

Athana: You think, but I know -- from the archaeological record (which cannot lie). The archaeological record shows men living 'under' Goddess to be happy, vibrant, masculine, healthy, satisfied, and proud risk-takers. I invite you to look for yourself: in any book on the ancient Minoans. Minoan men sailed all over the known world --a risky, dangerous business in 2000 BC. They engaged in risky, dangerous sports -- bull leaping, for example. They enjoyed hunting, and the sport of boxing.

In one piece of art they are shown laughing and singing -- something totally unheard of in the art of their contemporaries, the god-worshipping Egyptians, Hittites, Sumerians, etc.

Also unheard of among the manly, Goddess-worshipping Minoan men: war. Violence. Poverty. Self-aggrandizement. All of which run rampant in the contemporaneous ancient Egyptians, Hittites, and other god peoples.
Posted by Athana at 9:10 AM

Wow, all caps. Don't know what to say, between this and the responses to the previous post... Obviously I've hit a wall here, as there really wasn't much of a "response" to my "excellent and thought-provoking" comments, but the repetitive statements regarding archealogical evidence. I'm fully aware of the archealogical evidence of gods and goddesses, but I just don't personally feel that one's past has to exactly determine one's future potential, because then I should just give up now and kill myself, quite honestly.

The experiences in my life have just made me incredibly optimistic about humanity... And that's actually come with experience, so please don't mock me and say that'll change as I mature.

So, I guess I'll just have to respectfully disagree with the bulk of this...

1. "The archeological record does not lie." But is it not open to interpretation? Of course, some interpretations are better than others, but is the evidence truly incontrovertible that...

2. "Where there's Goddess there's peace; where there's God there's war"? Athana says there is a perfect correlation here. That is a very strong claim. I'll wager that you (Athana) know the research better than I, but this is still such a strong claim that the evidence for supporting it needs to be superb, or folks ain't gonna buy it.

Lisa, I'll give Athana the benefit of the doubt and guess that her all caps aren't shouting but a way to distinguish her comments from yours. But Athana, all caps always reads as shouting; it's a norm of the web.

Whoops! I stand corrected about the caps. Inana's right, Lisa -- I wasn't shouting at you, only trying to distinguish my comments from yours.

Oh, okay, cool then. Well, I kind of wrote a "response" to this on the July 29th "Goddess HOLY WAR" post. Maybe if I'm not exhausted from more class and public transporation tonight, I'll specifically outline why I believe citing the appearance of male war gods in c.3000 BCE is too short sighted for the issues that we actually do agree on... It's 1pm, and I'm going to grab a few minutes of sleep before I have to get on the bus for my next three hour class, argh!

I'll add some more to this as we go along, but basically, I agree with Athana. We've only been dealing with male gods for about 5-6,000 years, and where they become dominant, war, classism, rape, slavery and exploitation ensue. Always.

The Goddess is an inclusive image - she gives birth to men and to women. Nothing in Nature is 50-50. It always tips in favor of the female.

Quite frankly, I think this is nonsense.

Skadhi (armed and PISSED OFF, standing at the gates of Asgard, demanding restitution for Her father's death OR ELSE she would single-handedly raze Asgard)

Menhit (whose name depicts this warrier status, as it means she who massacres)

One of the three Zoryas

Ishtar (the Sumerians didn't HAVE a war God; they had a war GODDESS)

Freyja, especially, is NOT a Goddess I'd want to fuck with. She has armor and weaponry and knows how to use it.

Let's not forget that the Morrigan orchestrated CuChulainn's death when he refused to sleep with Her. Another one I wouldn't want to fuck with.

Has anyone told you that you sound like a broken record?

You're good for a laugh.

The Celts had Brighid, and they were fricking headhunters!

At the beginning, ancient people believed in matriarchy until man started to fight about nosense things and got against matriarchy creating a father god that accepted war, one of those religions was the judeo-christian-islamic religion.that religion nowdays consider God as male and female equal but thats not true since in genesis says that he first created adam in his own image from dust and also in the bible,torah and Koran treat women as not equal of men. the truth is that the first patriarch .. Abraham wasnt agreed with matriarchy so he decided to make his own god and it works! nowdays we have wars,mean people,etc its all patriarchy

I agree with flaunitarian (sorry if I have spelt that wrong), there have always been goddesses of war, just as there have been gods of war. Therefore you are no more likely to have peace under a goddess than under a god.
Plus most gods of monotheistic faiths are against war and violence, "thou shalt not kill.." etc, and it is just the crazy fundamental people who someone construe this to mean KILL ANYONE WHO DOESN'T AGREE WITH YOU. Personally I am Catholic, and despite having a God figure rather than a goddess have always been brought up to see peace as just and right, and war and violence as wrong. It is what was taught by Jesus and many others in the Bible.

ALSO we will never know what was meant by the majority of archaeological material, we just guess, we cannot know for sure what the people then meant it to portray.

p.s. i meant to say "somehow construe" not "someone" haha