a FUTURE FULL OF Goddess 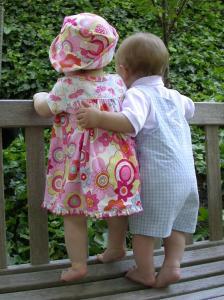 As Morgaine of The-Goddess so rightly reminds us, Yahweh and Allah are two sides of the same coin (see her 7/15 post). They are merely two halves of the same Big Daddy Deity duking it out -- now in Iraq, and a millenium ago in the "Holy Lands Crusades," as the Yahweh-ites called them.

Actually, this Big-Daddy duking may be the best thing that's happened to the planet in an aardvark's age. It might be our ticket to moving the Goddess into the driver's seat again. Once the world sees that Christians and Muslims are on the verge of annihilating themselves and the planet, the United Nations will step in. It will create a unilateral "God-the-Father-ban" treaty. All nations will sign, promising to ban father gods (who, as the world now realizes -- given half a chance and a century or two -- will decimate any human group they enter).

At this point, everyone not an atheist will turn to God the Mother.

At first the new Goddess world will not be perfect. Who could turn a cement hovel into a golden palace overnight?!? But I'll promise this: almost immediately after the Goddess takes over, the macroscopic ugliness on this planet will be halved. War, slavery, starvation, sickening poverty will begin to melt away. Even the microscopic uglies will melt -- the small dishonesties between two people, the lack of respect in groups of three, the souls dead before the body dies.

Ah, I do love the tales you spin! While we're waiting for that to happen, I think even a small shift in consciousness would help. If we could get people just to realize that the Earth is a living female, we'd start making better choices in how we use Her resources. If people would realize that not everyone prays to a male deity, they might stretch their minds far enough to consider that they might just be wrong in their opinions. Such small changes, but the results would be a thousandfold better than the one we're in now.

Yes, yes, yes. These might be excellent interim steps. And in America, we have hundreds of thousands who revere our Native Americans enough to appreciate their view of the earth as a living female. We could use that link to help people see the light.

I can see this female, this Mother -- this being just like the one who gave us the gift of consciousness -- writhing in pain. From pollution, deforestation, and species extinction. Our Mother is dying. But that's not the horror. The horror is, we are the ones killing Her. Our very own life source.

Could any species on earth be any more stupid than this?

She's not dying, but if we don't get back in balance, she may have to destroy us to regain her health. The Earth is a self-healing organism. She'll kill all of us before She lets us destroy Her, and frankly, we're running out of time.

You're idea about using Native American philosophy is a good one. Anything that gets people to realize this is a living being we're living on, and to treat Her accordingly.