EATING & Stealing IN THE POST-GODDESS WORLD 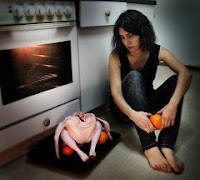 Why do men* in the post-Goddess world “colonize” women? Is it because they want more sex – and when they want it? Free housekeepers and cooks? More sons? (Not to mention ones they know are theirs, not Dickie’s down the street.)

Post-Goddess men colonize women for one reason and one reason only: they need reliable warrior-production machines.

1. Sex: Post-Goddess men don’t really like sex with women that much. All their myths shout out that women are just dying to devour their genitals. Samson and Delilah. Cuchulainn and Morrigan**. Any number of other mythical couples.

2. Housekeeping and cooks: Since when have “real” men given a hoot about a clean house or finely cooked food?

What they’re shedding crocodile tears over are abortion and homosexuality – precisely the items that would jam up their warrior-production Machines.