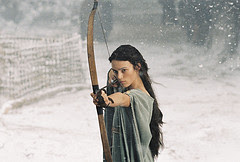 Oh, lovies! Why didn’t we spot this before? I think Jesus Christ is really King Arthur! Take a sneak peek at the evidence:

Second, according to this website, King Arthur was born on December 21.*

Doesn’t that turn Arthur into Jesus Christ -- the hero who at the darkest hour comes to save us all from Evil?

Thing is, since Arthur isn’t plunked into the same rule book with Yahweh “the … psychotic delinquent,”** he’s bound to be Big-Time better than Jesus.

Arthur of course picked up his power not from a psychotic delinquent, but from from the Great Guiding Goddess.

Have you heard this before -- that King Arthur was the British Jesus Christ?

It seems as obvious as the pointy dunce cap perched on Dubya’s head!!! Why didn’t we see it before?!

I don't think there's any question that the Mythical Arthur is one of the Saviour Gods/Heroes we humans have so many of.

I agree he's better 'n Jesus. His mythology is inextricably bound up with that of the Goddess, whereas Christ's has been shorn of Her.

Jesus didn't write, everything written about him and what he said was written by others and thereby hearsay.

In other words it's all monkey shit in the ruts of history as we travel through time and space.

Why even bother to study and understand all that old stuff? You either have the spirit in you or you don't.

I hope that you have a good new year. Hugs.

We at "The Gods Are Bored" endorse the deity otherwise known as King Arthur and reject as heresy the word "myth" when speaking of him.

Hence the title "Once and Future King" - Arthur falls, is taken to Avalon where he waits to return again. He pre-dates Jesus, but the Arthurian legends were intensely
Christianized when the Romans invaded the British Isles. I believe Guenivere was a Christian addition - his proper mate would have been his half-sister Morgaine, aka the Morrigan, also a triple Goddess. This corresponds directly to Isis and Osiris, who were siblings and parents to Horus who is the resurrection (Phoenix or Bennu Bird) of the slain Osiris.

Arthur, Odin, Jesus, Osiris/Horus, and many others represent both the sun and the harvest of grain. That's why they die the first of August, when the first grain is cut. (Leave it to the Christians to take Spring, a time for sex and birth, and turn it into a time of mourning.) Some claim that in times of drought, the male heir to the British throne was offered up at Lughnasadh, or Lammas Night, but I think that's also a Christianization intended to make people fear the old ways.

What's the old saying? "There's nothing new under the sun." It's all just re-membering our dismembered past. The only problem I have with Mary and Her offspring is that they're "mere shadows of their former selves."

I am a goddess-worshipper...HOWEVER, it's one thing to want to believe something is true, and another thing to say that it IS true because you want it to be. Saying that King Arthur is Jesus/God or an equivalent is a truly gallant leap...a leap OVER logic and historical periodicals. Several ancient texts mention late Dec. and virgin births, etc. from long before the supposed time of King Arthur. Many neo-Celts claim Christmas is adopted from Yule/Winter Solstice/. Others say that it was stolen from the Mithras cult that thrived during and slightly after the time of Jesus. A new and provocative site simply states that virgin births and important dates towards the end of the solar year (when most civilized societies knew that the agricultural season was returning to them) were a part of almost EVERY Mediterranan cult and spiritual movement...each one involved a savior, virgin birth around Dec. 25th, etc. Try going to http://www.pocm.info/getting_started_pocm.html and read up on how many "Christian/Jewish" ideas were borrowed from MANY Pagan religions. But the King Arthur thing... scholars who are more learned than you or I have never offered supporting opinions of that theory.

Not to mention...you're really forgetting the whole point of that King Arthur legend...his kingdom brought peace and prosperity for a LIMITED number of years. Camelot toppled because human greed, deceit, and selfishness infested everyone in the supposed "spic and span" kingdom of the new age. Things rise, they fall, they rise again. Ideas and ideals are great...it's when you trust humans to stay true to them that you encounter problems.

Think about this quotation, and I'll stop lecturing:

buy cialis said...
This comment has been removed by a blog administrator.
9:47 AM