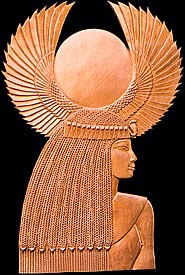 Listen to the goddess Isis.  It’s no accident that she gave her name to a group as similar to her as honey is to bug-infested rump roast.

She’s trying to get your attention.  We need to turn ISIS back into Isis, a peaceful way of life centered around a Goddess who used to rule over large parts of the same land skanky ISIS is now riding over roughshod.

There’s no way to bomb or “boots on the ground” these ISIS guys into giving up.  Boots and bombs will only make them dig in their heels.  Besides, they’re everywhere, so trying to bomb them off the planet would be like trying to bomb the sand off the earth:

“Jihadist groups are spread throughout Africa, the Middle East, and in parts of Asia. Some have connections to al-Qaeda, others do not. But they all share the common goal of creating an Islamist state through violence.”

The sad fact is, Mr. Obama, as long as the world gives war religions the green light, we will have war.  Constantly.  And it’s only a matter of time before ISIS-type guys get their hands on nuclear, chemical, and germ weapons.

There is a solution:  Change their hearts and minds.  Eliminate the world’s warfare religions.

The West could start by eliminating its own war religion, Christianity.  At the same time, all honest, intelligent and powerful citizens in Africa, the Middle East and Asia must work to persuade their Muslim citizens to give up Islam.

But these religions must be replaced.  All human groups past and present have (or have had) religion -- this is just fact.  But we need peace religions.  We used to have them.  All revolved around peaceful goddesses and gods

If we don’t return to peace-goddesses, let’s at least be honest and admit humanity’s time is about up, and that we are condemning our children, grandchildren, or great grandchildren to lives of unimaginable pain, ugliness and sorrow.


For more on this topic, read Switching to Goddess:Humanity’s Ticket to the Future,  found at most online bookstores.
________
Thnx to Vanishing Kingdoms for the image of Isis; go HERE to see more of their work.
Posted by Athana at 10:14 AM

Thanks for this post. I'm sharing these facts, in case you're not already aware of them: (1) President Obama (and as far as I can tell, other gov't officials) call the group ISIL. The President was reared UU.

I forgot the number (2); it should be in front of the last sentence in my previous comment.

Thanks for sharing, Medusa! I did know that President Obama has avoided using the term ISIS, and I have been so glad of it. Do you think his being reared UU has something to do with it?

If you think of number 2, let me/us know.

(2) is my sentence above "The President was reared UU." I really don't know if that has anything to do with his using ISIL rather than ISIS. I do know that the UUs have had adult courses about Goddesses for many years, but I think he would have been grown and probably away from the UU influence by the time they began.(He now identifies as Christian.) But that's just a guess. I do think that being reared UU would make him more sensitive to giving thought to minority religious views, as when he refers to and includes "people of no faith." But, maybe I'm dreaming and he had a completely different reason for using ISIL.I googled it and the only explanations I can find come from the radical right and, as you can imagine, are not very complimentary.

The UU church here does the "Cakes for the Queen of Heaven" classes, and maybe the church Obama went to offered something similar. He might very well be using "ISIL" to avoid using the name of a goddess.