USING MONEY TO Light YOUR FIRE 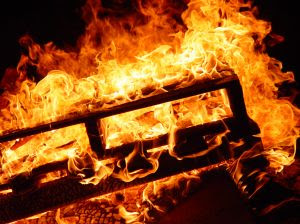 Money: that delicious green stuff -- sweet as perfume -- that snags you the things you want (heat, light and maybe a trip to the zoo on Tuesdays).

But money, kiddies, is in bigtime trouble.

Although money may seem easy to understand, it's not. And whether we like it or not, we need a big, chunky brain to lift us up out of the money mess Dubya the Republican's dumped us into over the last eight years.

Barack Obama has that brain.

John McCain does not.

There, he quickly sank to the bottom of his class.

As for his class on money ("economics"), I don't think Johnny McCain passed that class. Actually, he kinda admits he didn't. John McCain said, and I quote:

"... economics [i.e., your money] is not something I’ve understood as well as I should."

Later, McCain yelped, I didn't say that! [see the video below]. But in the video, a smart TV dude catches him on his lie:

Now I know we Americans like ta think we're all equal. That any of us could run the country.

But really: do you want to a dummy in charge of your money? Done that, been there! Like the Republican John McCain, the Republican George McBush is also a dummy -- and look what his teeny green pea brain has done to your money!

Come on. Like it or not, for many years now, the Dems have been the Smart Party. Like Barack Obama, John F. Kennedy also graduated with honors from Harvard Law School.

We might not like smart people, but smart people can be verrrrry useful. Like when your mom or kiddie, in order to survive, needs someone to cut 'em open and mess around inside their bloody inner organs. You want just any dude off the street doing that? Don't make me laugh!

Smart people are also useful when we're in a mess like now. Your money is in big trouble, folks. Like a pack of playing cards standing in a long, snaky line, all our money places ("financial institutions") are ready to tumble.

The first cards have already fallen (Lehman Bros., AIG). This is serious. Maybe you don't need money, maybe you wanna go live in the woods on roasted squirrel and huckleberries. But me, give me money.

Email ThisBlogThis!Share to TwitterShare to FacebookShare to Pinterest
Labels: Money

Well said! You've convinced me. I already knew I wouldn't vote for McCain but I wasn't sure I'd vote at all because I couldn't quite get behind Obama after Hillary was treated so shittily. But you've convinced me.

Yes Yes burn stuff...and McCain is unique. A maverick in his words, an efficient bureacrat in my world.

Thanks, keep the political Fires Stoked!