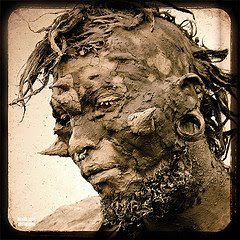 This feels like ripping the Father’s sheep mask off and coming face to face with the real blood-eyed monster, snaggle teeth blood-smeared, breath stinking with the stale blood of hundreds of thousands of women and children it’s consumed for lunch for the past several centuries.
___________
Thnx to nïkkito & sus increíbles fotos saltarinas for the foto; go HERE to see more.
Posted by Athana at 7:11 PM

Terrible! This group taught that women should to obey their husbands to reach heaven!
Greetings from Barcelona!

Welcome from Barcelona, helenic. Yes, can you imagine how men would howl if they were asked to follow a religion in which, in order to get to heaven they had to "obey" their wives?

To the Goddess, all Her children are equal, men and women alike. No one gets special treatment above and beyond what anyone else gets.

And she instructs us to view each other in the same way: all equally valuable, all worthy of the same respect and deep regard, no matter who a person is, how she behaves, or what she looks like.

Wow - excellent post! I have nothing against polygamy but that isn't what was going on in that cult. No one under 18 should be allowed to marry, and young girl should be forced to marry an old man, especially if he's a relative. This was systematic rape and child abuse - YAJ's specialty.