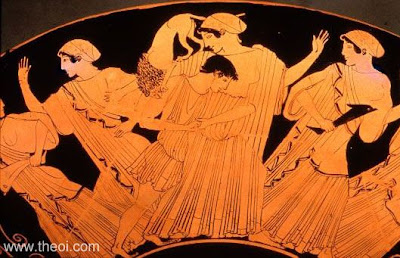 Whenever scholars talk about the low status of ancient Greek women, I always squirm in my seat. Somehow this low-status "fact" has never satisfied me.

I haven't studied Greek history formally, but a lot of what I do know comes from the art, especially the vase painting. (As an undergrad I churned out a 40-page paper on ancient Greek vase painting, which ended in the prof inviting me to join his excavation in Turkey that summer -- an invitation I declined--can't for the life of me remember, now, why I was so foolish).

At any rate, ancient Greek vase painting has its fair share of mighty looking Greek women, and maybe that's the source of my dis-ease. Now today I stumbled across a book by an archaeologist claiming that, contrary to current accepted belief, the status of ancient Greek women was not all that low.

PORTRAIT OF A PRIESTESS: Women and Ritual in Ancient Greece, by Joan Breton Connelly, Princeton University Press, 2007, is about

"...a formidable class of women scattered over the Greek world and across a thousand years of history, down to the day in A.D. 393 when the Christian emperor Theodosius banned the polytheistic cults. It is remarkable, in this age of gender studies, that this is the first comprehensive treatment of the subject, especially since, as Connelly persuasively argues, religious office was, exceptionally, an “arena in which Greek women assumed roles equal ... to those of men.” Roman society could make no such boast, nor can ours.

"With separation of church and state an inconceivable notion in the world’s first democracy, all priesthoods, including those held by women, were essentially political offices, Connelly maintains.

"These aspects of Connelly’s well-documented, meticulously assembled [book] ... contradict what has long been the most broadly accepted vision of the women of ancient Greece, particularly Athens, as dependent, cloistered, invisible and mute, relegated almost exclusively to housekeeping and child rearing ....

"Connelly traces the tenacity of this idea to several sources, including the paradoxically convergent ideologies of Victorian gentlemen scholars and 20th-century feminists and a modern tendency to discount the real-world force of religion....

"Connelly can cite more than 150 historical Greek priestesses by name. .... striking images of spirited women, at altars or leading men in procession, many marked as priestesses by the great metal temple key they carry....

"In turn, women habituated to religious privilege and influence in the pre-Christian era eagerly lent their expertise and energy to the early church. But with one male god in sole reign in heaven, women’s direct connection with deity became suspect, and they were methodically edged out of formal religious power.

“There may be no finer tribute to the potency of the Greek priestess than the discomfort that her position caused the church fathers,” Connelly writes .... Her priestesses may be ancient history, but the consequences of the discomfort they caused endure to this day.

Of course we can gather single "happy islands" were the female condition was a bit higher than the average, as female priesthood (e.g. Delphic Pythia), but these are a pre-Hellenic heritage. On the other hand, there is all the weight of Homer (especially the Iliad), Hesiod (e.g. Pandora's myth both in Theogony and in Works and Days), Xenophanes of Amorgos' satyr against women, until this graceful pearl of the epigrammist Palladas:

("every woman is a trouble, she has only two good times:
one is the wedding, the other is her death")

Connelly's whole point is that her archaeological research contradicts the Greek literature (which is where all *your* info comes from).

How do we know? There might have been scores of Greek women who wrote things like "every man is a trouble...," yada yada yada.

The tragic fact is, for the past 1700 years the writings of ancient women have probably been systematically burned, trashed and erased from human memory.