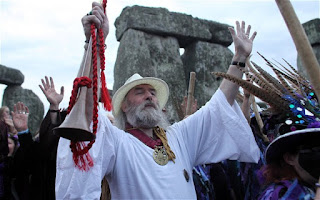 A deep bow of appreciation to all who honored the Goddess this year by celebrating the Solstice at one of her holiest of holy ancient sites: Stonehenge.

According to an educated dude from the University of Sheffield, however, we should be celebrating at Stonehenge at Winter not Summer Solstice.  Archaeology Prof. Mike Parker Pearson says -- and it makes sense -- that December 21 was a scary time for Neolithic people.  They killed their animals then, and felt a strong need to gang together against the wintry winds soon to howl around and beat against their cabin doors.
___________
PHOTO: Rollo Maughfling, the Archdruid of Glastonbury and Stonehenge conducting a Solstice celebration service.   Thnx to Matt Cardy/Getty Images for this image.
Posted by Athana at 3:40 PM No comments: 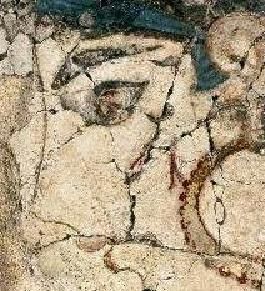 Athana sighed. “I have a time machine, Russ. I’m what you call an ‘ancient’ Minoan.”

“Athana …,” said Russ gently, leaning toward her, pity in his eyes, exactly as if she were a child to be taken home and rocked. Emily glared at the ground, arms still folded, then looked up at Athana sideways, her hazel eyes narrowed.

Athana dropped her hand under the table. After flipping a small bronze switch on the inside of her left boot near the heel, she stood quickly, grabbed Russ’s left upper arm and Emily’s right, at the same time drawing a picture in her head of where she wanted to go. Here, Antigone’s Café – but eleven hours into the future.

In that instant, the sun popped into nothingness, into a black hole. Nothing was but the blackness; it swirled all around them. Russ felt he’d lost consciousness, but not awareness, and wondered if he were losing his mind.

~ Excerpt from *Minoan Time Traveler: The Land That Worshiped Women*, Book 1. ORDER IT NOW on Amazon.com, now for only $.99.
Posted by Athana at 3:54 PM No comments: 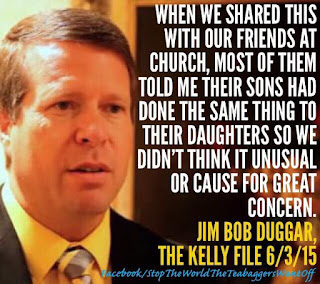 It’s dingly-darn embarrassing being forced to admit that dudes like Jim Bob Duggar are allowed to paddle their canoes down the rivers of my very own country.

If you haven’t heard of this poor piece of Christian-flesh, go here (but before you do, snap your nose shut with a clothespin or  two to staunch the stench).

In a world spinning around Goddess, this kind of dude would never see the light of day.  From birth he’d be trained to worship women, not bat them around like pieces of trash.

YAJ*, YAJ, YAJ.  People are so getting wise to you.  Isn’t it time you just slipped away, back into the crazy, burning brains of the ancient dead dudes who made you up in the first place?
________________
*”YAJ” is short for Yahweh/Allah/Jehovah, the god of Abraham.  Although most people think he’s three gods, he’s really only one (damaged, deranged, and psycho, poor thing). 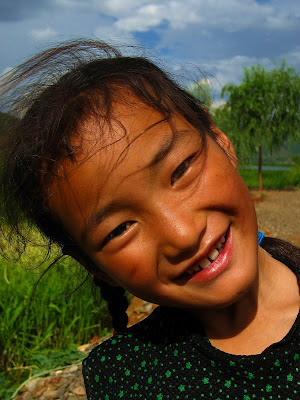 Richard asked three dynamite questions: "What would a Goddess country be like? What do you think the laws and the culture of a modern nation that modeled itself after the Goddess would be like? How do you think it would be perceived by the wider world?"

Fab questions, Richard. First let me say I'm not absolutely certain that a Goddess country could survive alone in today's world. That's why I've always stressed that the world needs to move together toward understanding and diluting what I call "starvation culture"* (which affects most of the world today, mostly through starvation-god religions such as the Abrahamaic religions and Hinduism but also through the older, outlawed starvation-god religions in places like China and Russia).

At the same time we're bashing the toxic old starvation gods, we must begin bringing back the old Guiding Goddess** ways of life. What would a Goddess country look like in the world today?

Social Equality. First, there'd be no social inequality. Everyone would be considered as equally valuable as the next person. Just as a healthy mother sees all her kids as equally lovable and valuable, so the people in a Goddess country would see everyone -- despite anyone's IQ, abilities, age, looks, skin color, or what have you.

Financial equality. Second, there'd be no poor people. Everyone would be rich. The Goddess-centered Minoans and Indus Valley people were some of the wealthiest in the world -- but everyone in these civilizations was equally wealthy. For example, in the large Indus Valley cities of 4000 years ago, everyone had the same high-quality stuff -- including indoor bathrooms. Indoor bathrooms for everyone was never again to happen until the 20th century -- when most in the West at least gave up their outhouses and turned to indoor plumbing.

Playful, creative, sensual. Third, compared to the people in most countries today, everyone in a Goddess country would be extremely playful, creative and sensual. There'd be a premium placed on one's abilities in these areas, so instead of considering them sinful or a waste of time, everyone would be totally lauded and praised for how well and often they showed playfulness, creativity and sensuality.

Economics. Fourth, I think a Goddess country would operate on the basis of a gift economy. The person most highly honored would be the person who could give away the most. For a great look at a modern-day gift economy, read Leaving Mother Lake, about the Goddess-centered (until recently at least) Moso of the Chinese-Tibetan borderland. The big problem in any economic system is how do you urge people to produce when we'd all rather sit back with our feet propped up sipping fine wine. In a gift economy, everyone works hard to produce so they can give the most away, and thereby win the praise of all their countrypeople.

Risk-Taking. Fifth, I think the people in a Goddess country would place an extremely high premium on risk-taking, pioneering, knowledge seeking, curiosity of all kinds, and adventure seeking. The Minoans had their bull-leaping and their wide-ranging mariners. Likewise the Indus Valley people had wide-ranging, curious, adventure-seeking mariners. Moso men go on long, adventurous trading journeys.

Government & Politics. The interesting thing about both the Goddess-centered Minoans and Indus Valley peoples was that we can't see any signs of their leaders. The Egyptian pharaohs (who lived at the same time) plastered pictures of themselves everywhere. But not the leaders of the Minoans and the Indus Valley. I wonder if the Minoans and the IVC weren't governed by councils with rotating, elected "moderators" to "lead" each council? In a society in which everyone is equal, why would a council moderator be any more "important" than anyone else? I'm envisioning the kind of direct democracy the North American Iroquois Indians had.

Law enforcement. In a mature Goddess country, there'd be no such thing as a police force. The archaeologist Jane McIntosh says that the up to 80,000-large Indus Valley Civilization cities had no police forces. Apparently there was no need for them.

Laws. I'm not sure a Goddess country would have "laws" as we know them. "Laws" are needed only when cultural morays no longer work. Laws were probably invented by the state (starvation culture).

War. If you don't even have a need for a police force, you're certainly not going to need armies (unless there are still starvation-culture countries left on the planet -- which we all need to work to get rid of ASAP). There's absolutely no indication whatsoever that the quarter-of-a-million-square-mile Indus Valley Civ. had armies or made war anywhere at any time (See Jane McIntosh's A Peaceful Realm).

__________
*For an explanation of Starvation Culture, plug the term into this blog's search box below.

**A "Guiding Goddess" is a goddess who births everyone and everything in the universe; who has no violence-prone, warlike god hanging over her right shoulder; and who isn't abused in any way by any possible gods in Her pantheon. The Moso, Basques and Hopi are three modern societies who, until recently anyway, had such Goddesses. I believe that many societies in the Neolithic and early Bronze Ages revolved around Guiding Goddesses. For more on this, see Studebaker's Switching to Goddess: Humanity's Ticket to the Future.
____________
Thnx go to Dirk Borchers for the foto of the Moso girl above (Dirk gave me permission to use this photo in Switching to Goddess, and hopefully he won't mind if I use it here too) 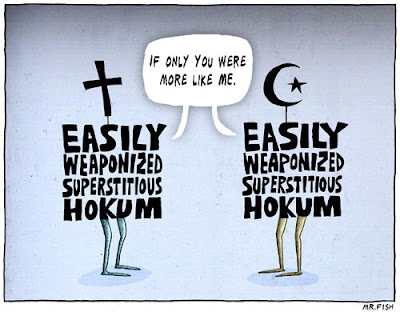 Poor Mr. YAJ*.  He has a fairly wicked case of schizoid schizophrenia....

[For the artwork, we thank BornAgainPagan.]
__________________
* Mr. YAJ is Yahweh/Allah/Jehovah.  Most think he is three separate deities, but he's really only one and the same dude: the god of Abraham, born 6000 years ago out of the sizzling hot brains of desert people gone mad from starvation.

Posted by Athana at 5:29 PM No comments:

THE LAND THAT worshiped WOMEN 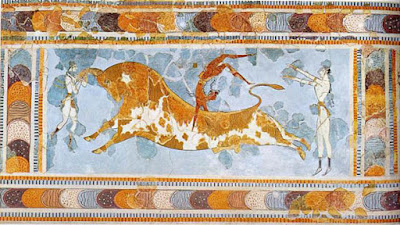 THE LAND THAT WORSHIPED WOMEN: Minoan Time Traveler (Book One)

"Lying at the joining point of three colossal continents – Asia, Africa and Europe – the tiny island of Crete is often labeled the Cradle of European Civilization.  The Cretan Minoans, arguably the architects of Europe's first civilization, were cut down in their prime in 1450 BC by Mycenaean invaders – but if they hadn’t been, some say that by the time of Christ they'd have landed a man on the moon.  After their technological skills, the Minoans are best known for their bare-breasted women and their bull leaping — a sport so dangerous modern bull fighters say it can't even be done.

"From the air, Crete looks like a man floating lazily on his back in the middle of the Mediterranean Sea.  Today on Crete, East rubs shoulders with West on a daily basis. Round-domed Muslim mosques mix with Greek Orthodox churches, and markets mimic Turkish bazaars. Medieval streets shrouded in shade wind through towns like loose ribbons, and the oldest streets are so narrow a person can stand in their middles and almost touch the the sides of the buildings teetering at their edges.  Outside its cities, Crete is a rugged, barren mountain chain snaking across the spine of the island, honeycombed with caves and wild, cavernous gorges.  Sharp-eyed tourists might catch a glimpse of the rare Cretan wildcat, or the shy Kri Kri, the Cretan wild mountain goat.

"From 1450 BC on, when the Mycenaeans crushed the Minoans, Crete has been a land of resistance fighters.  Its traditional male dress, therefore, should come as no surprise: black bloomers, black military boots, and daggers stashed in zounari — crimson waist sashes twenty-six feet in length. The black symbolizes Cretan respect for those who died trying to defend the island against 3000 years of conquering Mycenaeans, Dorians, Romans, Byzantines, Venetians, Turks, and, finally, in World War One, Germans.

THE CAT HAS jumped THE BAG 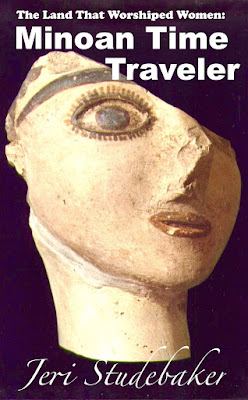 The secret cat has jumped the bag, now.

At last my story will be told.

It is a story piled high with danger, intrigue, evil, love, mystery and magic.

It is the story of a woman who tries to rescue the 21st century.

It is the story of a woman who also tries to rescue an ancient matriarchal civilization fighting for its life.  My civilization.

Children, I am that woman.  I am a Minoan time traveler.

Order Athana's two books at your country's Amazon.com store.  The second book in the series is called Love Inside the Ruins.
Posted by Athana at 12:38 PM No comments: